Three days of rain caused some minor flooding at my place, so I didn't get to the festivities as early as I would have liked, but I made it. There was no way a little water was going to keep from this year's scumbag soiree. I have to apologize for the lack of pictures, I think I just got caught up in everything this year to properly document it.

After the ball hockey tournament debacle last year, Grimbrothers James & Jake decided to pull up stakes and move to another venue. After six years at the Centennial Hall, Shock Stock invaded the Ramada Inn. A pair of conference rooms were used for the vendor village and two for screenings and Q&A's. By the end of the weekend, everybody was in agreement this place was superior and a much needed change of scenery. 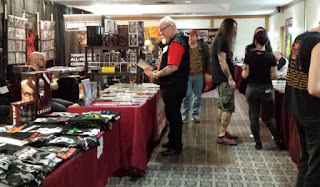 We pretty much took over the entire place and I couldn't believe how accommodating the establishment was, considering how rowdy things got at times. The tiny in-house bar was overwhelmed the first night, but they did their best to accommodate Saturday's festivities when Miss Shock Stock took place in the hotel's restaurant. There was something beautifully makeshift about it that felt just right. Blood and boobies in a place where a few hours later there would be a breakfast buffet sounds like wonderful magic to me.

The layout was nice and compact and it was really convenient that it took place in the same building as most of the attendees were staying. I hear there are some shows in the States (like Cinema Wasteland) that operate like this and it's a great idea. I was down the street at the HoJo to save a few bucks, but I'll definitely be splurging and getting a room in-house next year.

I picked up a shit-ton of merch. I didn't have my wingman Schwartz with me this year, so I think I overdid it in his absence. He's the one who usually goes overboard, so I couldn't be the voice of reason this year. There also just seemed to be a lot of stuff that called to me this year. 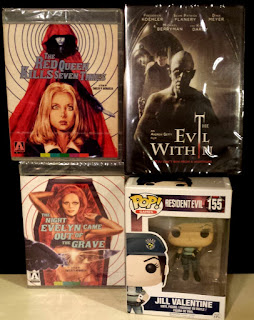 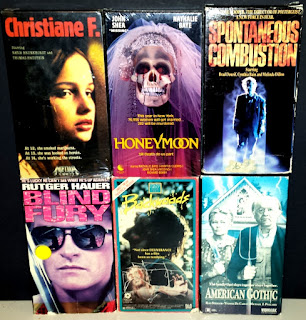 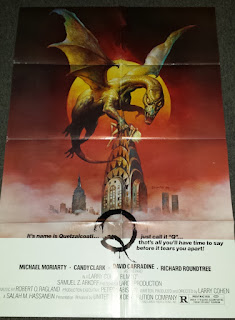 Also, for some reason I bought a pile of buttons even though I never wear them.

Apart from the vendor village, I watched some shorts, the cream of the crop being The Butcher Shop's newest Human Cattle, Kyle Hytonen & Derek Lukosius' Infirmity and Chris Giroux's Scraps. 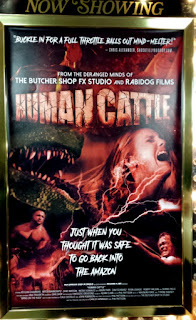 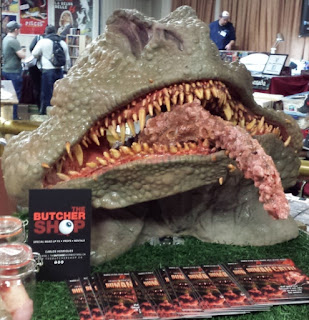 The one horror Q&A I did attend was actress Caroline Williams of Texas Chainsaw Massacre 2 among others. She was very lovely and had some great stories about working in the business. Here are some bloody bits;

On her first impressions of Tobe Hooper;
“He was short, and bossy and said 'fuck' all the time. He had a big cigar and Dr. Pepper going all the time. He wasn't into the esoteric of acting, he didn't want to hear my motivations. He was like, 'this is the shot, this is how we're doing it, this is what I want you to do' and that was it.”

On working with Dennis Hopper;
“The value of working with Dennis is that's how I learned the technique of film acting because the way you look on camera, the way you're lit, the size of the frame, those things are essential to an actor. That way you can make more of a creative contribution. I didn't any of those things until I met Dennis. When we were blocking our scenes together on the stairs, Dennis was saying 'I don't want to sit on this side, I want to sit on that side because the woman should look pretty in a movie even if she's bad (character-wise) so Caroline you come sit over here' because that was my good side. He had already gauged what that was. He knew everything and it was instinctive with him.”

On seeing TCM2;
“I went with friends of mine and we sat in the back of the theater and there was a girl sitting in front of me going, 'she doesn't cry pretty'. So I had to listen to this bitch talk about me the whole time. But I had a great time. It was very well received by the fans for the first couple of weekends and then after that it kind of dropped off the map. But, you know, it gave me a place to go, as I've told Tobe before, without him and without this film, the rest of my life wouldn't have happened in quite the same way.”

On fan love for Stretch and TCM2;
“I think it's that crazy quilt of characters that Stretch encounters. It's like Dorothy in Oz. You know, you've got The Tin Man and The Scarecrow, but they happen to be Chop Top and Leatherface, and The Cook and all these crazy motherfuckers underground. Watching her go through her journey and ultimately save the day. I mean, I got to follow Marilyn Burns as a Final Girl under the direction of Tobe Hooper. That's kind of a big deal too, you know? Because I couldn't lift Marilyn's performance, that would've been impossible. This one was very balls out and comedy and just had so many crazy moments. I think the movie endures partly because it hasn't been remade and it doesn't dilute the impact of seeing it for the first time.”

On indie film financing;
“I think that's the future of indie horror. You do have to find, and I hate to say it, real estate investors. They will capitalize their investment thoroughly, they are willing to put the money into it that needs to put into it to make sure the project comes to complete fruition and they know they will not get an immediate return on their investment. It could take a year or two before they get their money back. These are the kind of guys that are willing to take some chances. And as an alternative revenue stream, if you're a young filmmaker, or writer or producer, start thinking about real estate investors. Wilson DaSilva is one of the biggest redevelopers in Toronto, he bought Anchor Bay Canada and renamed it United Front Entertainment.”


It was a terrific weekend that just felt like one big hangout. It was nice to get away from mopping up water from my kitchen floor and get greasy for a couple of days. As always, the Vagrancy Brothers know how to do it up. Here's to next year!
Posted by Jay Clarke at 10:00 AM

"Three days of rain caused some minor flooding at my place, so I didn't get to the festivities as early as I would have liked, but I made it."

I been reading in the news about all the flooding out in your area, in Oakvillistan:

If you find that you collect more memorabilia than you have space to showcase or use you should do some giveaways on your website. It's Spring cleaning time.

Yeah it sucked but nowhere near as bad as the Ottawa valley.

I'll never have too much junk!