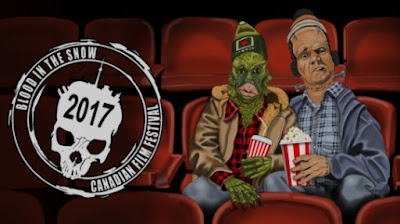 Next up on the Blood in the Snow docket was Rob Grant's documentary Fake Blood. 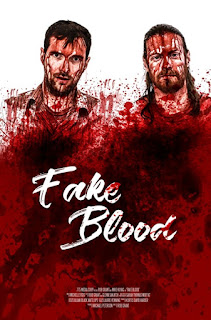 An attempt to make a documentary about whether cinematic violence inspires the same in real-life pulls two filmmakers (Grant & Mike Kovac) into some very dark places.

Fake Blood was a very clever documentary. It was not only a piece about violence in film, but also the nature of filmmaking itself in that often you set out to make one thing and it, seemingly on its own, morphs into something else entirely. This was a perfect example of people chasing a story and falling down a rabbit hole into imminent danger. I found it very difficult to discern – without any context – how much of this documentary was fact, and what was fiction. I mean, I know it must have been, as there are three credited writers on the project, but it was so well crafted. 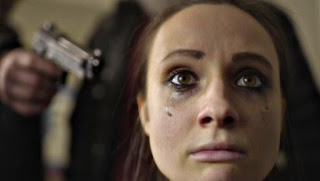 As storytellers, Grant and Kovac do a commendable job of setting the stage, using a weird fan video they received about the correct way to dismember a body (in response to seeing it done in Grant's previous film Mon Ami) as a jumping off point for their exploration into their responsibility as filmmakers when dealing with violent material. This was all very natural with nothing showy about it.

Later on in the film when they encountered a, let's say shady, individual, the ensuing dramatizations were consistent with every true crime show you've ever watched. Just when I had been sucked in by them, Grant, in a stroke of genius, pulled back the curtain to remind you that you were watching a recreation of a recreation. My brain was constantly trying to access how much of this was real and that's the mark of a good film.

Fake Blood was definitely the most realistic doc I've seen in on this topic since J.T. Petty's 2006 faux-snuff doc S&Man. Unfortunately with Grant's film, I didn't get the luxury of having Petty point out his on-screen antagonist in the front-row after the screening. Until someone tells me definitively and I can breathe the sigh of “well of course that wasn't real”, this doc will be clanking around in my head for sometime.
Posted by Jay Clarke at 10:00 AM