The fourth edition of Horror-Rama took place last weekend and I, of course, was there to take in the festivities.

This year saw the convention move to another venue, an arts & culture space in the Annex. While the last two years at the Hyatt certainly allowed the con to expand, it felt a little constrictive to the vibe that organizers Luis Ceriz and Chris Alexander were trying to create. Spread out over a half-dozen rooms, the venue this year recaptured the essence of year one. 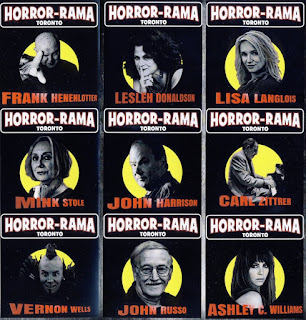 Also, unlike the previous two years when it fell during Toronto After Dark, I was actually able to fully enjoy Horror-Rama, as I was not running back and forth between venues all weekend. As is tradition with horror conventions, I also got to hang with my buddy Schwartz. Our continued failure to keep each other from spending money on horror merch was upheld I can assure you.


All the usual suspects were in attendance, but I felt there was an especially strong showing of VHS & Blu-ray vendors this year, from Arrow to Vinegar Syndrome to Suspect Video. It is always great to catch up with Brad at Poster-Mortem and Rob from the Canadian Cult & Horror Community, as well. 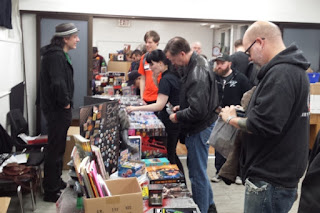 I did quite well this year acquiring some interesting VHS titles. 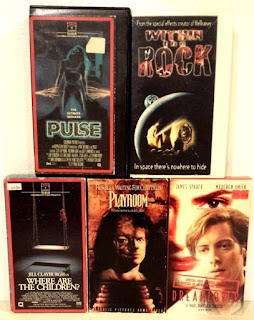 I've never heard of Where Are The Children? but Jack Sholder and a cool cover was worth a two-fifty gamble. I'd been looking Playroom & Pulse for some time, and well, Dream Lover is self explanatory.


On the Blu-ray side, Vinegar Syndrome sold me on a couple of titles. First, was Demon Wind with its recreation of the original lenticular VHS...

The other was one I didn't even know had been released on Blu-ray in Gorman Bechard's Psychos In Love. That had me with its terrific cover art. 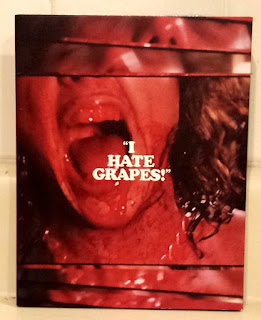 I also couldn't resist picking up this little guy either. 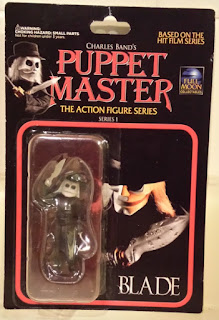 Like last year at Horror-Rama, the Blood in the Snow Canadian Film Festival took the opportunity to announce their 2017 line-up at the show. 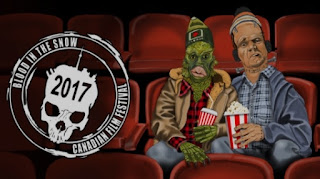 It looks like a good line-up this year with several colleagues of mine having projects premiering here. I am particularly looking forward to Jeff Sinasac's Red Spring, just because I know how long he's been working on it. I know a handful of people who worked on Ryan M. Andrew's Art of Obsession, so that'll be cool to see, as well.


Some other titles that intrigued me are the faux-doc Fake Blood, Buckout Road and the It's Alive vibe of The Child Remains. I also haven't seen a good chunk of the shorts programme, so I'm always keen to add stuff to my Little Terrors wish list.


Sunday, my only real goal was to talk with visiting Canuxploitation royalty Lesleh Donaldson & Lisa Langlois. I'm not usually one for autographs, but I had to get my Deadly Eyes VHS signed because this seemed like a rare opportunity. Ms. Donaldson is such a nice lady, and I made sure to tell her that I found the theatre used in the movie thanks to her input three years ago. 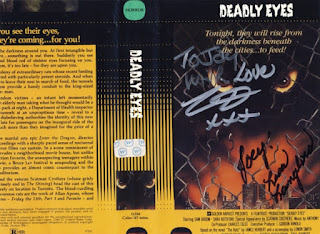 I also never usually bother people for photos, but she was so friendly...

This was a happy day. The pair's ensuing Q&A was also very informative. They talked about when they met on Happy Birthday to Me and being surprised that any of these old movies have endured. They also brought up how many of those pictures were involved with some shady characters that to this day have still not paid what was owed. I was shocked to learn that Langlois had made more on residuals from a guest spot on one episode of Murder She Wrote than she did on all of her Canuxploitation work combined.

Mainly, the talk was a clinic on navigating the film business then and now, touching on everything from the actresses they were always in competition with, to the differences between working in Canada & the US and all the ugliness that is just finally coming to light now. Langlois compared this level of upheaval to when women burned their bras in the sixties, and with a new name seemingly being outed every week, who can argue?


And that was a wrap on Horror-Rama 2017. It definitely felt like a return to the first year and its intimate setting and I'm all for it.
Posted by Jay Clarke at 10:00 AM