Sometime ago, a member of the Laser Blast Film Society put forth the idea of doing a Hellraiser marathon. Similar endurance tests had been undertaken before with the likes of the Resident Evil and Saw series' - plus that legendary time we watched films for twenty-four hours straight - so no big deal, right? Well, I'm not sure we were all aware - at least I wasn't - when we signed up for this that there were actually nine fucking titles to the Hellraiser franchise. I myself had previously only seen five with vague recollections of three of them.

So last weekend, we did it. We absorbed nine films in fifteen hours and emerged with our souls relatively intact. But we had to get creative. We started with Hellraiser, mainly because not all in attendance had seen it and we wanted to create a base. Going forward though, we decided to watch the rest of them at random - our fate decided by a dice roll. 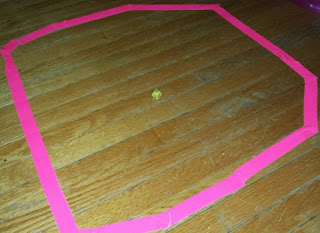 Whatever number came up, we watched that sequel. In keeping with the theme of hell, we also employed some penalties for various transgressions. For instance;

Punishments involved us watching ten minutes of various terrible Halloween specials, namely the animated David S. Pumpkins' and Michael Jackson ones. Worst of all by a large margin was the Big Bang Theory special. Holy fuck, I'd rather watch all nine Hellraiser films again rather than suffer anymore of that. It is mind boggling how agonizingly unfunny that show is.

We were also “treated” to the Hellraiser fan film No More Souls featuring a sixty-year-old Pinhead lamenting Shakespearean-style about days gone by. Then the two Cenobites from Hellworld walk out and stab him to death. Hurm. That the director of this (though an accomplished FX artist) was in fact responsible for the upcoming tenth film in the franchise did not instill me with a lot of confidence. 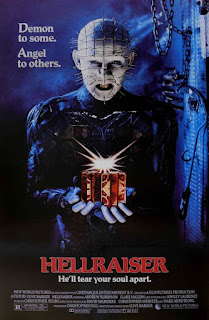 Where it all began. It is still the best and the make-up effects are straight up terrific. What a breath of fresh air Clive Barker was circa 1987. In a world of slashers and creature features, he brought forth not only iconic imagery, but interesting and provocative themes. I always forget that considering how iconic The Cenobites are, they had very little screen time. I also found it quite funny that Pinhead was, in fact, relatively easy to trick. Kirstie (Ashley Laurence) was super good at it.

Kirstie: Frank escaped you!
Pinhead: No one escapes us!
Kirstie: He did, I've seen him.
Pinhead: ...Suppose he did escape us...

OR in Part II

We were watching the Arrow Blu-ray release of the film and as a result I noticed for the first time there were a couple of dicks nailed to that turning pillar of carnage at the onset.

So now that we had a good foundation, the first die roll was a 9. Yes folks, we went right to the shit. 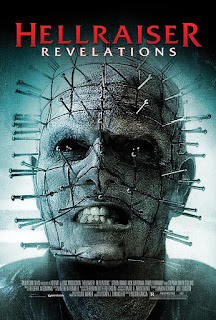 Revelations, the super cheap flick from 2011 that was seemingly made just to keep the rights. The movie is by far the worst out of the bunch and thank God we got it out of the way early. I am one-hundred percent sure we would have not finished if we watched them in numerical order.


I think the worst thing was that, unlike parts 5-8 which put on different skins, Revelations just aped the first movie. It was more like a really shitty reboot of Hellraiser, than a sequel. It was painful, but thankfully only seventy-five minutes - trust me we checked to see how much time was left on several occasions.

The next dice roll was 8. Hellworld.

Hellworld was released in 2005, and the third and last Hellraiser sequel directed by Rick Bota. I knew nothing about it, except it had something to do with a Hellraiser-themed MMO. From what I understand, a good number of these Hellraiser sequels were unrelated horror scripts with some Pinhead shoe-horned in at metered intervals. I can see that. This movie was definitely made in the wake of Saw. There's a scene you could have stuck in one of those movies and you wouldn't know the difference. Also, it had this veneer of self awareness where the franchise existed in this world so characters wore Pinhead apparel and used terms like “the Lament Configuration” and “wall-walker”.

However, despite that this movie ended up being my favourite of the post-canon sequels for two reasons. First, it starred, unbeknownst to me until the opening credits, both Lance Henriksen and Kathryn Winnick. Secondly, in Saw-like fashion, Hellworld had a ridiculous hail Mary plot twist that made no sense that somehow made the movie infinitely more entertaining. We were all confused as to why Pinhead - when he was in it - had become a stock slasher villain and said twist explained that. I'm pretty sure it was unintentionally clever on the filmmaker's part, but I'll take it!

The next roll was 4. Bloodline. 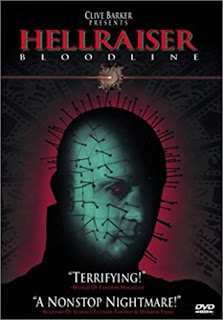 Bloodline was the last true Hellraiser movie and also the last theatrical release - which I saw in its original run. I remembered very little, except that it was in space - a trend popular with fourth installments. I appreciated that director Kevin Yagher attempted something a little higher concept with the multiple time periods, but it was a little dry and I don't think that was all due to studio tampering. Even though the series was getting stale, there were still a lot of great effects in this with two practical explosions - one you get to see twice!

But, getting back on the subject of tricking Pinhead, the best part in the movie is the priceless look on Pinhead's face when he gets duped by a hologram.


I think by this time my brain was starting to short circuit because I only remember bits and pieces of this one. Adam Scott in his period getup, the cool Cenobite design of Angelique, that Kim Myers - the Meryl Streep lookalike from NOES 2 - was in this one and the entertaining space station effects. 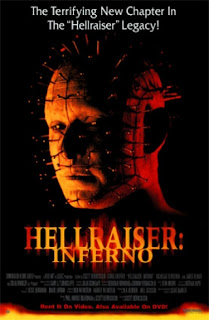 Inferno was the first direct-to-video title and also the first re-appropriated script - a detective noir thriller. The influences are many, but Lost Highway, The Bad Lieutenant and the stuff David Fincher was doing in the last-half of the nineties are right up front. It has a few interesting sequences, namely the cowboy poker game, but it - like many of these middle sequels - often meandered into watch glancing territory. The ending was pretty pedestrian and has been done better on a least half-a-dozen occasions.

The next roll was lucky. Number 2. Hellbound. 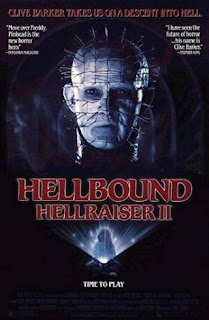 We were getting into a rut, so it was fortunate that Hellbound came up at this point. This is a lot of people's favourite and I'd agree the most visually interesting. It brought back the characters from the first movie and successfully expanded the universe. The effects built upon the grotesqueness and even marched into cringe-worthy territory. It even has some sweet stop-motion stuff in it, as well. Hellbound was just the pick up we needed, before falling off the ensuing cliff.

The next roll was 7. Deader. 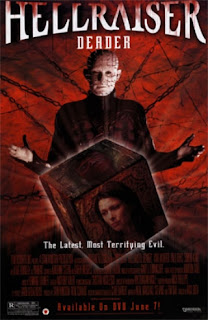 This one was a slog that starred Kari Wuhrer as an investigative reporter tracking down a death cult of people called Deaders. It was shot back-to-back with Hellworld in Romania. It was a pretty dull affair, but I'll take Wuhrer over Inferno's Craig Sheffer any day of the week. I do recall two memorable things, the first being two sequences that took place in a club that happened to be on a running subway car and the other involved a bloody scene where Wuhrer tries to pull a knife out of her back. It was oddly arousing -- oops did I type that aloud?

Almost there. The next roll was 6. Hellseeker. 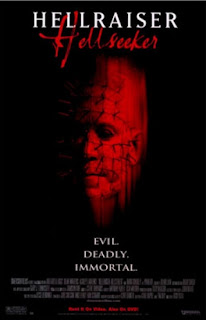 We were pretty happy with this roll, because it meant we got to end on something fun with Hell on Earth. Hellseeker was the only non-canon sequel I had previously seen. I remembered it being pretty good. My memory lied to me. This was even more of a chore than Deader. And it even had Ashley Laurence back as Kirstie! It was another uninteresting noir that couldn't even be saved by the talents of Dean Winters.

I realized that for some reason this series seemed better suited to female protagonists. Someone brought up the point that many of these sequels are even Bechdel approved, as there are several women team-ups over the course of the series (Kirstie/Tiffany in 2, Joey/Terry in 3 and Amy/Marla in 7). Equality shows up in the weirdest places it seems.

Last, but not least was part 3. Hell on Earth. 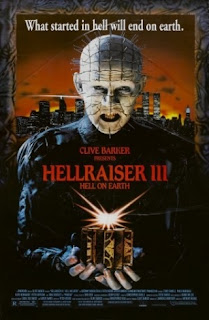 While I still maintain that the scene where Pinhead and company march down the street while dispatching cops was the point-of-no-return moment of the Hellraiser series, after watching all the non-canon entries Hell on Earth was a helluva lot of fun. I think the theatrical version I saw might have been cut because I didn't remember a lot of the gore in this. I believe this one has the most Cenobites per capita, as well. Even if Pinhead was pretty much doing his best Freddy Krueger impression by the end, I can still appreciate it.

Hell on Earth came out in 1992, right when mainstream horror was in its death throes before being revitalized by Scream a few years later. This movie had a decent start, but by the third act, director Anthony Hickox was basically throwing everything at the screen and just hoping something would stick.

And then we were done! This marathon was not nearly as painful as I was expecting. Hellseeker & Deader weren't great, but still miles better than Revelations. I think that was the only one that really tested our mettle and, as I said, it was a Godsend that we got that over with quickly. Should you ever attempt to do this yourself, know that it is possible.

Not advisable. But possible.
Posted by Jay Clarke at 10:00 AM

"Hell on Earth came out in 1992, right when mainstream horror was in its death throes before being revitalized by Scream a few years later."

I guess you are a better analyst on how this genre of film was going at that point since it was up your wheelhouse, but I thought Scream was both an endcap and a satire of the previous ten years of slasher films? While Scream was big at the time at the box office, the film didn't seem like the vanguard of what was to come down the line, but rather something more in the zeitgeist of the early '90s.

Scream was definitely a comment on the slasher films that came before it, but it was also a fresh shot in the arm for a genre that was undergoing an identity crisis. If you look back at the years 1993-1996 the significant mainstream horror films were few and far between. This began a few years earlier when high profile "psychological thrillers" like Silence of the Lambs and Jacob's Ladder gave way to a new attitude in Hollywood. It was then that straight up horror was again considered low-brow. I recall that Fangoria had to resort to putting Jurassic Park on their cover at one point. Scream brought horror back to the forefront.