Hello everyone! It's Halloween-time again! I've known what I was going to creep around as this year for quite sometime, ever since seeing the FX show Legion earlier this year. Meet my rendition of The World's Angriest Boy In the World! 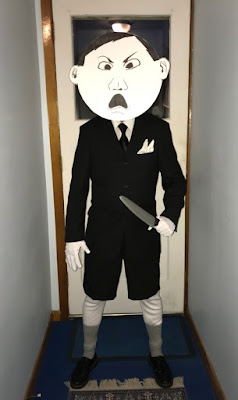 The awesomeness of Legion was a big surprise to me, as I was expecting a decent superhero show and got a psychological horror with a troubled mutant protagonist (Dan Stevens) whose powers sometimes manifest themselves externally - including the subject above from perhaps the most inappropriate kids' book ever written. I have no doubt that the critical acclaim of Legion - and the success of It - are the reason that the recent New Mutants trailer was edited as it was. I cannot wait for Season 2. In the meantime, may all your candies be sweet...
Posted by Jay Clarke at 10:00 AM