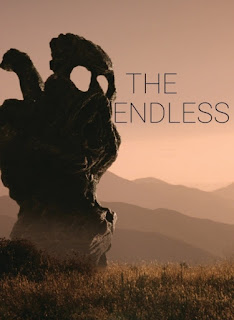 Two brothers (Directors Moorhead & Benson) return to the commune of a mysterious cult they left several years before.

I was very much looking forward to this movie because frankly, these two make great films. During their intro, Moorhead & Benson explained that they had many offers after the successful festival run of their sophomore effort Spring, but they ultimately decided to go back to their roots after those all stalled. While it's true that decision meant smaller budgets, it also provided the fair trade of more control. And believe you me, they'd need it for a project like The Endless.

I don’t want to say too much about the movie itself because – like their debut Resolution – it is best to just let it happen, but these two movies do heavily tie into each other. The Endless shared a similar format as its predecessor, in that the entry point was something fairly standard and then went completely sideways from there. I really dug this. Moorhead & Benson vastly expanded the universe that we only glimpsed a tiny piece of in Resolution to the point that it was like getting two films in one.

Moorhead & Benson say they have a concise mythology written for these films and I believe that, as their movies do reveal more with each subsequent viewing. Stepping into the lead roles themselves, the directors seem to have even more focus toward their unique vision.

I liken The Endless to David Lynch's Fire Walk With Me. Not in subject matter of course, but just in how it related to what came before it. Twin Peaks, like Resolution, exists on its own – coincidentally both end in cliffhangers – but is significantly broadened in scope by the additional material. There were even thematic similarities between the fates of their characters and Lynch’s pre-Return Dale Cooper. I also adored that the communication through vintage media was carried over from the previous film, as well.


I am really glad that Moorhead & Benson are not only making films, but also dedicated to producing original content that smashes the norm. Even more admirable is that they had the opportunity to sell out and decided not to make movies by committee. I have a tremendous amount of respect for these guys and can’t wait to see where they go from here.
Posted by Jay Clarke at 12:00 PM