Next up on the Toronto After Dark docket was a movie to which I was much looking forward in Justin Decloux’s Impossible Horror. 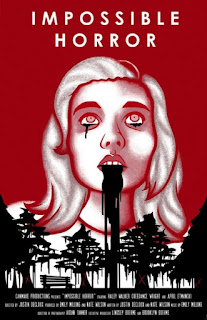 So full disclosure. I’ve known the people behind this movie for years and I contributed to the Indiegogo campaign, but bias aside Impossible Horror was a really fun watch and a special treat to see friends and locations with which I was so familiar on the big screen.

Decloux is a ravenous cinephile and it shows, as this movie was rife with influence, the bulk of which coming by way of the Asian horror movement, most notably Kyoshi Kurasawa, Takashi Miike and Shinya Tsukamoto. Yet even though he used many iconic moments in cinema as jumping off points, Decloux always seemed to land somewhere far from expectation.

During his intro, Decloux confessed that he had always wanted to make a Lovecraft movie, but of course having no money meant there would have to be a distressing lack of monstrosity. To cleverly subvert this, he came up with the scream hunting angle and went from there. The resulting mystery and the energy with which it was portrayed were the real strengths of Impossible Horror.

To compensate for the low budget production values, Impossible Horror had some great sound design and the score was legit fantastic. Emily Milling wore many hats on the project, but this was her best contribution. On many occasions, I found myself being aware of how bangin' it was. I'd stack it up against some of the best soundtracks in recent memory.

After watching this, and his previous film Teddy Bomb, I've keyed into something unique about Decloux's style. His characters speak in a particular and calculated cadence that is very distinct. That requires a level of discipline that very few filmmakers possess. He is also very good at juggling genres, as in addition to J-Horror and Lovecraft, he also managed smatterings of kung-fu, buddy comedy, surrealism and, perhaps most resonant of all, a movie about making movies. I'm reminded of a scene in an alleyway where Lily walked by a random pile of tapping screws and used condoms. It's a bizarre combination that immediately makes you wonder how it came to be.

Decloux (and his equally talented co-writer/co-producer Nate Wilson) have continually showcased they can impress with micro-budgets, so imagine the horrors they will unleash if (when) they get some serious money behind them.
Posted by Jay Clarke at 10:00 AM

Wow, this is really interesting reading. I am glad I found this and got to read it. Great job on this content. I like it. 192.168.l.l -It’s used to enter in web-interface which also known as admin panel.