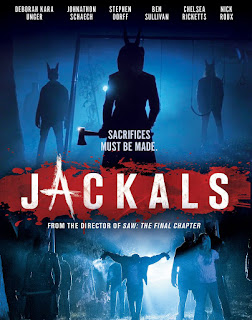 After a family rescues their son Justin (Ben Sullivan) from the clutches of a mysterious cult in order to deprogram him at their summer home, the “Jackals” soon show up and lay siege to the house.

You may be asking yourselves if you need to see another home invasion movie involving antagonists with scary animal masks. The answer is probably not, however I feel like Jackals is a step above the fodder your Netflix algorithms would push on you. The performances were all above board and the production reaped the benefits of having veterans like Deborah Kara Unger, Stephen Dorff and Johnathon Schaech on deck.

Greutert's execution as a filmmaker was solid, I think it was just that the story did little to elevate it past that. The setup was intriguing, but then a decision was made, likely an attempt to buck expectation, and it made the movie less interesting as a result. There was also a moment later on involving the eldest son Cam (Nick Roux) that held some potential, but then zigged when it should have zagged. I also felt myself wanting to know more about the cult. As Homer once said, “Your ideas are intriguing and I would like to subscribe to your newsletter.” Also, the movie needed more Fox Girl. One hundred per-cent more Fox Girl.


I liked Jackals well enough, but I feel it could have been great if its third had been less unremarkable. The last reel of this movie has been done so many times, I think you really have to bring it if you want to stand out from the crowd. That said, if you're looking for something new to scratch that animal mask home invasion itch, then by all means - join the Jackals.
Posted by Jay Clarke at 10:00 AM