Let's Kill All the Lawyers.

On Tuesday, Toronto After Dark screened Joe Lynch’s Mayhem, a title to which I had been looking forward for quite some time. 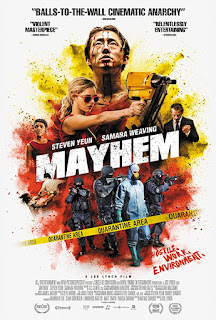 When a virus that causes people's inhibitions to recede infects an office building, the white collar workers inside must wait out the quarantine while the effects subside.

Mayhem was crazy amounts of fun and Joe Lynch through and through. This was a perfect example of the solid genre content that him and his unofficial collective (including the likes of Adam Green & Paul Solet) have been making for over a decade now. Lynch has an energetic quality that permeates his work, but he also doesn't take himself too seriously. This film in particular was very polished and with having been shot in Serbia using pretty much one location, I'd wager that it cost much less than it looked like it did.

I should address the inevitable comparison to Greg McLean’s The Belko Experiment. The setup of both movies was similar, but the driving force behind both efforts was not. In Belko, the characters actions are based on survival, whereas Mayhem it was revenge, or depending on how you look at it perhaps even justice. Lynch's movie was definitely the more fun of the two, as clearly his main goal was to entertain by playing on the hot button issue of the downtrodden rising up against corporate oppressors.

I do maintain that Belko was a much more edgy and mean spirited effort, but also not without humour. However, anyone who has seen James Gunn's previous indie work (namely Super) knows that his comedy is of a jet black nature.

Mayhem's construct allowed for more camaraderie between the two leads Steven Yuen and Samara Weaving and they made a fantastic pair. Her career is exploding and Yuen is doing very well after his exit from The Walking Dead. The movie's plot device was a little hard to nail down at times, as it appeared to be a rage virus like the one in 28 Days Later, but nowhere near as powerful or consistent. It was almost as if the actual violence perpetrated by the infected was a choice rather than a condition. It's a delicious concept, but never fully explored in my opinion. No matter, it didn't take anything away from the movie for me.


Mayhem was a super entertaining and slick horror comedy featuring a lot of great actors letting loose and having fun with the material.
Posted by Jay Clarke at 10:00 AM

The website is looking bit flashy and it catches the visitors eyes. Design is pretty simple and a good user friendly interface. https://larsennash.com/

Thank you for helping people get the information they need. Great stuff as usual. Keep up the great work!!!
raleigh traffic ticket lawyer

What a fantabulous post this has been. Never seen this kind of useful post. I am grateful to you and expect more number of posts like these. Thank you very much. Law

This is very educational content and written well for a change. It's nice to see that some people still understand how to write a quality post.! visit https://www.eliaandponto.com/michigan-auto-accident-lawyer/ for a lawyer

Keep up the good work , I read few posts on this web site and I conceive that your blog is very interesting and has sets of fantastic information. https://www.gpwlaw-mi.com/

Your blog provided us with valuable information to work with. Each & every tips of your post are awesome. Thanks a lot for sharing. Keep blogging.. asbestoscancer.org

Thanks for sharing nice information with us. i like your post and all you share with us is uptodate and quite informative, i would like to bookmark the page so i can come here again to read you, as you have done a wonderful job. PLEase go to site insta stalker

It’s appropriate time to make some plans for the future and it is time to be happy. I have read this post and if I could I wish to suggest you few interesting things or advice. Perhaps you could write next articles referring to this article. I desire to read even more things about it! check this site

I appreciate everything you have added to my knowledge base.Admiring the time and effort you put into your blog and detailed information you offer.Thanks. umrah packages