Soon after the film adaptation of Stephen King's infamous novel Gerald's Game dropped on Netflix, I eagerly queued it up. 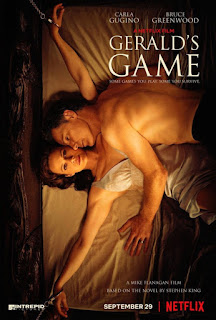 A romantic getaway turns deadly when Jessie (Carlo Gugino) is left handcuffed to her bed when her husband dies (Bruce Greenwood) during some kinky role play.

I was pleasantly surprised by how well Gerald's Game turned out. Director Mike Flanagan's interpretation was excellent and I would go so far as to say that it's one of the purest King adaptations out there. It's been donkey's years since I've read the book, but from what I recall everything was left intact, yet nicely condensed to fit a one-hundred minute running time. He even kept in the references to King's other works like Dolores Claiborne and the pervasive Dark Tower in addition to some throwaway lines about Cujo and Bag of Bones that made me chuckle. Though with all these connections, I was puzzled why they relocated the story from Maine to Louisiana.

Most impressive was how effortlessly Flanagan put this onscreen when you take into account that this book was long considered unfilmable. How can film a movie where the main character is nude throughout the whole thing? And more challenging, how can you film a movie where she spends most of it in her own head? Well, the solutions to both were actually pretty simple, it just took a talented problem solver like Flanagan to figure them out. First, don't have her be naked and second, externalize her inner voices into physical form. I thought this worked really well and felt much more organic than the device used in last year's 11/22/63. In that one, the filmmakers expanded a bit player for the protagonist to play off, but by doing so increasingly veered from the subject matter. In Gerald's Game, these tangible manifestations fully visualized the core of the piece.

Additionally, I really appreciated that there were no important compromises made. Jessie's revelation halfway through the movie was just as uncomfortable to watch as it was to read and though the epilogue may have been creepier on the page, it still needed to be there. I was also taken aback by the cringe-worthy gore at the climax. It really went from zero to sixty in a matter of seconds.

Flanagan aside, I really have to commend Carlo Gugino. I praised the perfect casting when I heard she was attached, but she really delivered here. Both her & Bruce Greenwood were fantastic and brought the characters to life. It had been a while since I'd seen Henry Thomas too – and to be honest I wish it was under less sleazy circumstances. Gerald's Game was really top notch from A to Z. 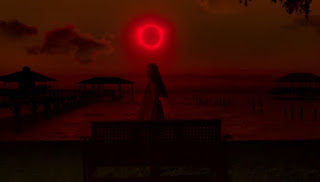 I think Flanagan has cemented himself as the premiere genre director working today. He has a string of strong indies and has now proved that he can kill it with other people's material. Shit, I might even have to check out his next Netflix project, a miniseries based on The Haunting of Hill House, also starring Gugino (Theodora?!) How can I not at this point?
Posted by Jay Clarke at 12:58 PM