Hello all. I'll use this opportunity between IFFF and BITS to get in a little Don't Kill the Messenger post - well that and watch eight Freddy movies but more on that later. Here's what I've got.


Artist Butcher Billy is at it again, this time envisioning each Stranger Things 2 episode as its own pulp paperback novel.

He also did some sweet Atari cartridges that you can see here.


I might as well sound off on the second season while I'm on the subject. I liked it well enough, but I feel like The Duffer Brothers kind of doubled down on the less desirable aspects of the show, as they hit the “look it's the eighties” vibe even harder this time around. I get that they were often using it to mirror thematic elements - Dragon's Lair foreshadowing the Max/Lucas/Dustin love triangle for instance - but it was decidedly distracting, especially when I'd seen it done less sensationally in It this summer. 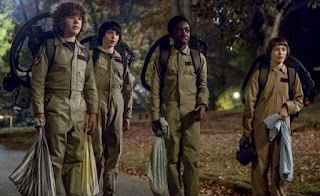 I dug the new characters Max and Kali, but never felt they weren't given as much to do as they should have been. Mainly, I just have to echo Max's statement to Lucas in episode five - something to the effect of “I liked it, but it was derivative in parts and I just wish it had a little more originality”.

I mean, did they think that re-staging the battle scene from Aliens (with Paul Reiser no less) was going to be met with anything but chuckles at best and eye rolls at worst? Anyway, moving on.


I wanted to plug a Kickstarter campaign for a local short project called TiCK.


Burke and Wessel are both local film community fixtures, so I'd like to see this succeed. Twenty-Four by Thirty-Six was a really entertaining documentary and Wessell's last short Ink had a really unique energy to it. If you feel like dropping some coin, click here.


Here below is the newest trailer for Gabriel Carrer's Death on Scenic Drive.


I'm looking forward to this, as not only does it feature some of my favourite people, but it looks like Carrer has gone full-Refn, something that I know he has been wanting to do for quite sometime. I believe this is set to be released in the coming months, so keep your eyes out.
Posted by Jay Clarke at 12:45 PM