The Belle Of The Bloor!

There’s nothing like watching an old classic projected on the big screen. As part of Fangoria editor Chris Alexander’s monthly movie night at The Bloor, he busted out a 35mm print of Carrie. 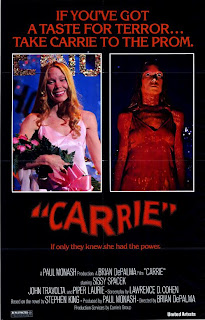 Now, we all know how good the film is, one would expect no less from Stephen King's storytelling combined with director Brian De Palma's stylistic sensibilities, but what is truly gratifying is that it still rocks as hard as it always did even thirty-five years after its initial release. It had been a long while since I’d seen the film, but I obviously remembered all the bits that have become ingrained in pop culture – like Piper Laurie cackling “they’re all gonna laugh at you” and the image of Carrie, standing rigid in her pig's blood drenched prom dress – so this time I chose to concentrate on some of the things that lay beneath the surface. The most engaging of which was how much more visible Carrie's transition is than I remembered. Sissy Spacek puts in an undeniably deep performance to be sure, but now I’m old enough to realize just how layered it was. I recall her being a full-on mouse to crazed killer in an instant, but that's not the case at all. She certainly starts off that way, as at first Carrie can barely look people in the eye. However, when her once infallable trust in her mother is shaken early on, Carrie eyes are opened. Receiving positive reinforcement from her gym teacher Miss Collins (Betty Buckley) and track star Tommy Ross (William Katt) only serves to boost her confidence and begins to believe she deserves to lead a normal life. She finds the strength to spar with her overbearing mother and finally start living. This transition is ever so slight, sometimes it is as subtle as her hair being pushed back where previously it hung over her face. The beautifully shot sequence on the dance floor with her and her date – which incidentally reminded me a lot of the opening sequence of Black Swan – is the moment where she fully lets herself go and fully believes that everything is as it seems. 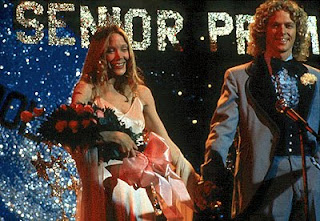 I have to echo Alexander's comments before the film, when he said that because everything is going so well for Carrie just before the shit hits the fan, you almost forget just that. You are in the moment, just like Carrie White is. The filmmaking here, especially the final moments leading up to the prank, is the mark of a master craftsman. De Palma holds onto the tension for as long as humanly possible.

I also noted just how many young up-and-comers there were in the film, including PJ Soles, William Katt and Amy Irving. Nancy Allen & John Travolta would appear together again in De Palma's Blowout in 1981. I find it funny that Edie McClurg played a high schooler here and then went on to play Principal Rooney's secretary in Ferris Bueller's Day Off just a decade later.

Lastly, it warmed my heart to see that last perfect jump scare could still make a few people in the audience jump. What a fantastic screening! As with the other iconic horror titles I have caught on 35mm, they never seem to disappoint.
Posted by Jay Clarke at 5:28 PM