Hello all, here's what I have for you this week.

In a few weeks, my buddy Schwartz (of Cartoon and Horror) makes his triumphant return back to the Great White North after a six-month stint in Los Angeles. He made spectacular use of his time while he was there - and en route - visiting several movie locations, such as the plantation in Interview With A Vampire, the house from Poltergeist and the farm featured in The Texas Chainsaw Massacre. Probably the most epic of his excursions though, was going to the Myers house from Halloween. I am so jealous he got to do this. Check out the pics below. 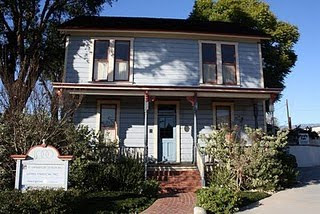 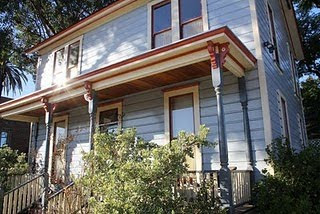 I wonder if you snuck a look in the window, you'd see two teens making out? For the full article on Cartoon and Horror, click here.

I saw an intriguing trailer for a film called Without on Twitch this week. This debut from American filmmaker Mark Jackson played Slamdance last month and won a jury prize.

I can see several flicks in there, the most paramount being fellow yank Ti West's House of the Devil, but also Jessica Hausner's Hotel with a little Skeleton Key thrown in. If Without takes the best elements from that trio, then this could be something special.

I was watching G4 the other day and saw a review for an iPhone game called Hysteria Project 2. Though the review wasn't particularly favourable, I was interested in the live-action Choose Your Own Adventure format. After doing a little investigating I found that the first game was available on the PSN for a mere dollar-ninety-nine. Well, that's a no-brainer. So, after taking thirty or so minutes to play through it, here are some quick impressions. Though the gameplay was rudimentary, the only controls were the X and O buttons, and the quality was extremely poor - what can you expect playing a game designed for an iOS on a 50" plasma - I kind of have to respect BulkyPix for giving this a go here.

I've always yearned for someone to bring back the type of games I used to play on the SegaCD. Also, as someone who has been working on a CYOA project for a while, I know how time-consuming it can be. However, like Heavy Rain, the Hysteria Project games could serve as a jumping off point to bigger and better things so video games can take that final step into true immersive and interactive storytelling.
Posted by Jay Clarke at 9:48 AM