In amongst the ample festivities of this past weekend, I hosted a VHS movie night featuring a pair of Canadian creature features. The first was Deadly Eyes, which I needn’t elaborate on – as you already know how much I adore it – other than to say that my guests got a kick out of watching dachshunds dressed as rats, as much as I did. The second flick was a rare eighties oddity called The Pit. 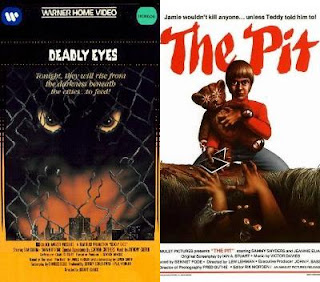 I mentioned The Pit in a past post featuring some of the more obscure video store titles that left an impression on my teenage brain. I acquired a copy of it recently and was anxious to see if, twenty years later, it still held up.

For the most part, I’d say yes. I think The Pit’s main strength is how it just keeps heaping on the bizarre. So, you’ve got a twelve-year-old outcast named Jamie. He has a teddy bear that talks to him. Oh, and he also has a hole in the ground filled with “Tra-la-logs”.

People. Seriously. What more do you need?

Further adding to the oddness is the tone. The story is fairly absurd, but everyone plays it straight, even though there are zany music cues happening throughout. I really do have to hand it to Sammy Snyders though, as he has to carry the movie, as Jamie. I find it remarkable that, for a low budget horror flick such as this, the filmmakers were able to find someone who could put in this kind of a performance. I’ve seen kids in Hollywood blockbusters be far less convincing. 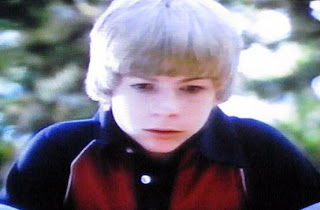 The Pit also takes some interesting turns toward the end. Aside from the obvious escalation of what has to happen to keep Jamie's pets fed, you don’t know where it's going to go. That is also something not often found with movies of this ilk. It was of course limited by what it could show in terms of gore, but at least there were smatterings of nudity here and there. Actually, there’s a funny story about how director Lew Lehman’s wife wouldn’t let him film any of the nude scenes, except the skinny dipping because the actress was his daughter. Yeah, I know. I fail to see how that’s better, either.

Anyway, I enjoyed revisiting The Pit. If you like curious little gems that march to the beat of their own drummer, I would suggest tracking it down.
Posted by Jay Clarke at 10:02 AM