I'm running at about half-speed today, but here's what's been up the last week. 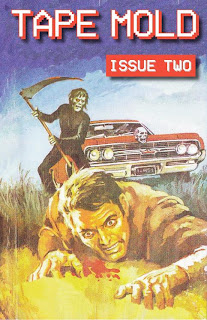 Focusing on VHS culture, Tape Mold is quickly gaining readership. This month's issue features interviews with filmmakers Dave Coleman & Chris Witherspoon, as well as a video spotlight on Tapeworm Video. For more info on how you can get your hands on Tape Mold, click here.

It's The Zombie Apocalypse, Charlie Brown.

I'd say this wicked mashup from artist by Justin Hillgrove speaks for itself. 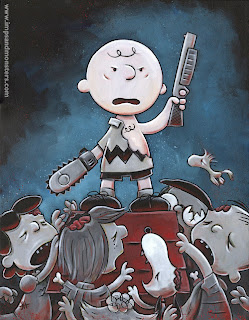 Hillgrove is currently running a contest to name his creation. You can sound off by going here.

I was happy to hear the announcement that the character Tyreese will soon be making his entrance into The Walking Dead TV show. Played by The Wire alum Chad Coleman, Tyreese is rumoured to be making his first appearance sometime during the mid-season finale.

This is good news, as I was never sure whether they were going to bring him in, or whether T-Dog (IronE Singleton) was supposed to be some loose incarnation of him. Sadly, I guess the coming of Tyreese, does not bode well for Oscar (Vincent M. Ward), but I guess we'll have to see.

So, for my American readers, enjoy the rest of your Thanksgiving weekend, and for my brothers closer to home, enjoy The Grey Cup.
Posted by Jay Clarke at 12:21 PM