Trailer Tuesdays: Three On A Meathook

This week's trailer is for the 1972 backwoods horror flick Three On A Meathook. Take a look courtesy of YouTube user PathGrinder.

The narrator cracks me up every time. I've never heard so much verbal diarrhea in a trailer before.


“...it touches the full spectrum of the bizarre, the forbidden. The twilight areas of a life destined to be spent in shadow and agony...” Huh?


“...Forcing the will into blind canyons of lonliness and despair! A stolen life onto a Godless oblivion...” What now?


“...Little broken dolls that go on dancing, after the music has stopped...” Okaaaay.


However, as cheesy as the narration may be, I can't help but wonder if it influenced the John Larroquette-voiced opening crawl of The Texas Chainsaw Massacre two years later. I mean they both share the same inspiration - Ed Gein - so it is within the realm of possibility that Tobe Hooper and company may have seen this flick when it came out. Three On A Meathook also get points for following through on its title. What you see is what you get, folks! 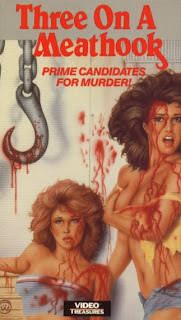