Now that all of this film festival coverage is behind me, I can get back into knocking off the rest of these Time Out Best 100 List titles. The next one I checked out was Robert Fuest’s 1971 film The Abominable Dr. Phibes. 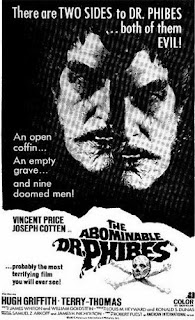 A police detective (Peter Jeffrey) struggles to find the man responsible for a rash of bizarre murders involving physicians.

This shouldn’t come as any surprise to anyone who has seen this, but The Abominable Dr. Phibes is a gem of a film. There were several things about it that I was really not expecting. It is lavishly colourful and has this strong musical element that really gives the film some pomp and circumstance. It is fantastical and possesses that flamboyant air of an older generation of motion pictures.

It is also fairly restrained in the top half of the picture, using only the aforementioned music and camera to tell the story.  In fact, I believe it is at least a full ten minutes before a single line of dialogue is even spoken.  This falls in line with the great Vincent Price’s performance as well, as you can tell he fully relished this part.  Apart from a few monologues delivered through a speech device, his role is all mannerism. It was a joy to watch. 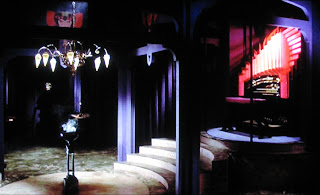 The film overall is just a fun time. Fuest is able to toe that line between humour and the macabre wonderfully. The deaths, based off the ten plagues of the Old Testament were made for some creative set pieces.

Most of all though, I was just plainly unaware of how influential this film was. I could see so many contemporary films inside The Abominable Dr. Phibes, whether it was Sam Raimi’s design of Darkman or the biblical-inspired serial killings re-appropriated for David Fincher’s Se7en.  Hell, James Wan basically lifted a scene right out of this film for his debut, Saw.

Out of all the movies that I have watched for the Time Out List, The Abominable Dr. Phibes is definitely one I regret not seeing as a youngster. I feel I would’ve really latched onto this, being that I’ve always been a fan of Ten Little Indians-style fables. The Abominable Dr. Phibes is wildly inventive fare that looks stunning to boot and easily earns its place on the list.
Posted by Jay Clarke at 10:00 AM