The next film I checked out on the Time Out Best 100 List was Elem Klimov's 1985 film Come and See, a title that just cracked their list at #100. 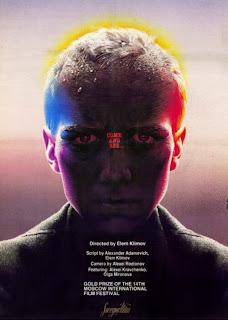 Set during WWII, a young Byelorussian boy named Flyora (Andrei Konchalovsky) is recruited into the Soviet army and it isn't long before he experiences the many horrors of war.

I knew absolutely nothing about this film going in, which is a rare occurrence. When was the last time you saw a film completely cold? As I watched, I realized that this film was not a horror film, but rather on the list because it was, by design, inherently horrific. Like Time Out List entries Threads and Salo, (#93 and #77 respectively) it depicts humanity at its utmost ugliest.

Come and See is not as well known as most contemporary war films, but it is no less important. It is incredibly raw and shines a light on a particular region that was sandwiched between the Russian and German forces. It was one of the worst places to be during WWII, as either side had free reign to do whatever they wanted to the population caught in the middle of their conflict. Klimov's filmmaking is extraordinary and his liberal use of Steadicam really gives you an on-the-ground sense of this unfortunate time. The narrative is long, meandering and often disorienting, but then again, so was the campaign of which it was documenting. 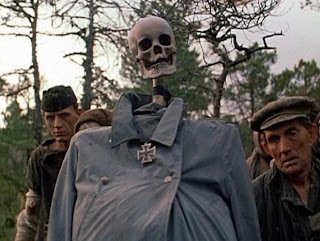 As I said, Come and See is not a horror film, but I can see why it made the list. This film would've had a profound effect on young filmmakers upon its release. It was 1985 (though while I was viewing it, I would've guessed it was even older), shortly before two seminal American war films, Platoon and Full Metal Jacket, would hit screens.

I don't have much more to say about Come and See. Before watching it, I would've said there were countless horror films that deserved that last spot (Candyman, Session 9 and Cemetary Man to name a few), but now that I have, I can't in good conscience say that it doesn't deserve to be on there.
Posted by Jay Clarke at 10:00 AM