I'm starting up a new feature today called Trailer Tuesdays. It has always been a priority here at The Horror Section to showcase the wonderful coverboxes that adorned video store shelves during the VHS era, but I also wanted to pay homage to another awesome marketing tool - the trailer. Condensing a movie's essence down to a minute or so is tricky business, but I find it offers an experience that is sometimes - as was the case with coverbox art as well - better than the movie itself.


To kick things off, I present to you a favourite of mine, Chopping Mall.

While re-watching this trailer, (courtesy of YouTube user ChadBloodyHorror) I realized that the mall where this was shot is the same one featured in Commando. It's the multi-sided elevators that give it away. It's good to see the head explosion money shot made it into the trailer, as well. Here, for good measure, is the cover box. 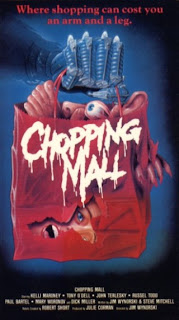 I see a mall-themed movie night in my future.  Dawn of the Dead seems too obvious, so maybe The Initiation?


Lastly, as I was linking to Imdb, I saw there is apparently a Chopping Mall remake coming in 2013. But it won't involve killer robots. WTF?! Let me guess, the producers are going to flip a coin to decide between zombies or vampires.
Posted by Jay Clarke at 10:00 AM