I managed to orchestrate another VHS Nite at my swanky, not-so-new pad last weekend. It took a bit of planning, but the stars aligned enough to get some Toronto folk on a train to my neck of the woods in due course. On the docket this time around were some British off-the-beaten-path anthologies. After taking a detour at the Wimpy’s down the street – it could say I planned that in keeping with the English flavour, but the truth is our choice of cuisine was completely random – I fired up the VCR.

In the mid-nineties, ITV broadcast a five-part-anthology horror series called Chiller. A few years later it came to Canada via our local broadcast station TVO. Due to its penchant for playing a lot of British programming, my parents regularly tuned in and one evening I happened to catch an episode of Chiller entitled “Number Six.” 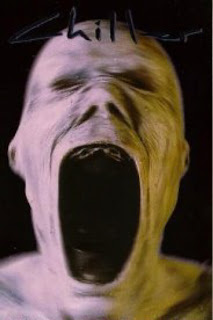 Years later, I was able to watch the rest of the episodes on video (coincidentally, it is being reissued on DVD next month through Synapse), but Number Six remains my favourite of the series. I adore it, mainly because of the tone, skillful storytelling and the blurring of the natural and supernatural. I think it was this episode of Chiller that really clued me into British genre television’s slightly darker bent, as images from Number Six still linger in my mind today.

The next VHS I put in was the eighties UK anthology Screamtime. 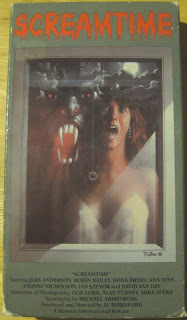 It features three macabre tales, plus a cheesy wraparound strangely set in New York. It begins with a couple of hoods walking down 42nd Street, who then steal some VHS tapes from a video store, which later turn out to be the trio that make up the anthology.

I am a big fan of Screamtime and was glad to be able to dust off my VHS copy. The first and third stories “That’s The Way To Do It” and “Do You Believe In Fairies” are really fun, and “Dreamhouse”, the one in between, has some genuinely freaky moments.

As far as I know, Screamtime was never released on DVD, but I just found out, while searching the Web, that it’s now on Netflix Instant. So, my neighbours to the south, if you are a fan of eighties anthologies, here’s one that is well worth your time.

That’s another VHS Nite in the books! Now to find more suitable VHS goodies for the next one.
Posted by Jay Clarke at 10:00 AM