Hey all. Here's what the messenger has for you on this first weekend of the year.


As I mentioned in my preview post a few days ago, the sequel to Tommy Wirkola's crowd-pleasing zombie comedy Dead Snow is one of my most anticipated of the year. Well, below is the new trailer.


I like the organic nature of how the story is being continued here, and the gimmick at the very end is sure to please. This looks like some great fun.


This one's a few weeks old I know, but I couldn't resist throwing it up here. Here below, is a wonderful Twin Peaks homage from graphic artist Martin Woutisseth.


As of Christmas Eve, the new book Hidden Horror: A Celebration of 101 Underrated and Overlooked Fright Flicks has been available over at Amazon. 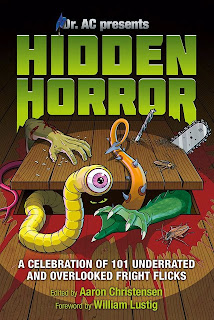 Cinephile Aaron Christensen culled together short essays from several distinguished pillars of the industry, including Tony Timpone and Dave Alexander. While looking into it, I discovered that the Amazon previewer gives you the rundown on the lineup inside. Here's a sample.

It's a pretty stellar list, but, as with anything that is considered “underrated” or “overlooked”, there is always room for debate. I mean, I'm pretty sure that we're beyond the point where anything by Dario Argento is considered fringe. Though Tenebrae may not be as highly regarded as Suspiria or Deep Red, I consider it a go-to giallo film. As for some of the Asian titles in the book, I was under the impression that The Eye, A Tale of Two Sisters and Kairo (Pulse) were basically the next tier down from gateway drug films Ringu & Ju-on. All this aside, Christensen does make his intent clear in the foreward.


“This is not meant to be a comprehensive list of alternative titles. In fact, quite the opposite is true. Its intent is to open doors and minds, stimulate taste buds, and expand boundaries. The best way to approach this compendium is as an epic pot-luck movie party where everyone has brought a favorite dish and wants you to give it a try. Finally, in addition to acquainting you with some unfamiliar titles, we hope HIDDEN HORROR inspires you to break out those fondly remembered faves gathering dust and introduce them to your own dark minions.”


I am fully on board with that. Make no mistake, there are a ton of choice titles in this book. I fully believe that John Carpenter's In The Mouth of Madness is grossly underappreciated, and if this book gets more people to watch films like Razorback, Kill Baby Kill, Night Warning and Tourist Trap then it is a win-win for everyone.

To order the book from Amazon, click here.
Posted by Jay Clarke at 12:25 PM

Thanks so much for spreading the word, Jay! And yes, I'm totally on board with you in regards to the fact that any list of this nature is bound to raise a few eyebrows. The thing that I had to keep reminding myself is that everyone is on a different path and at different stages in their "horror education." As you say, TENEBRAE is go-to material, but there are young mainstream fans out there who are learning about Argento and giallos for the first time - if we can steer them toward the good stuff, then I can't feel bad about including a title like that. Ditto the Asian fare, where someone might only know about the first tier (RINGU, JU-ON) or worse yet, only their American remake counterparts. Anything to get the folks into the deeper waters, right?

Thanks again for giving us some virtual ink, brother! Keep waving that horror banner high!

No problem. Glad to help! Yes, if we're talking about clean slates then for sure Argento is a must. I certainly wish I could see some of those titles again for the first time. Can't wait to get my hand on the book!