Good afternoon everyone. It's a beautiful day out there, so I'll make this brief so I can go visit Ye Olde Hammock as quickly as possible.


This week, Fangoria broke the news that there is a new horror convention coming to town this November. Managing editor Chris Alexander and Suspect Video owner Luis Ceriz have joined forces to bring us Horror-Rama, which they describe as “a niche convention, bringing together legends of horror cinema and dark pop culture for an intimate and interactive couple of days in the heart of the city.”

The first two guests to be announced were; 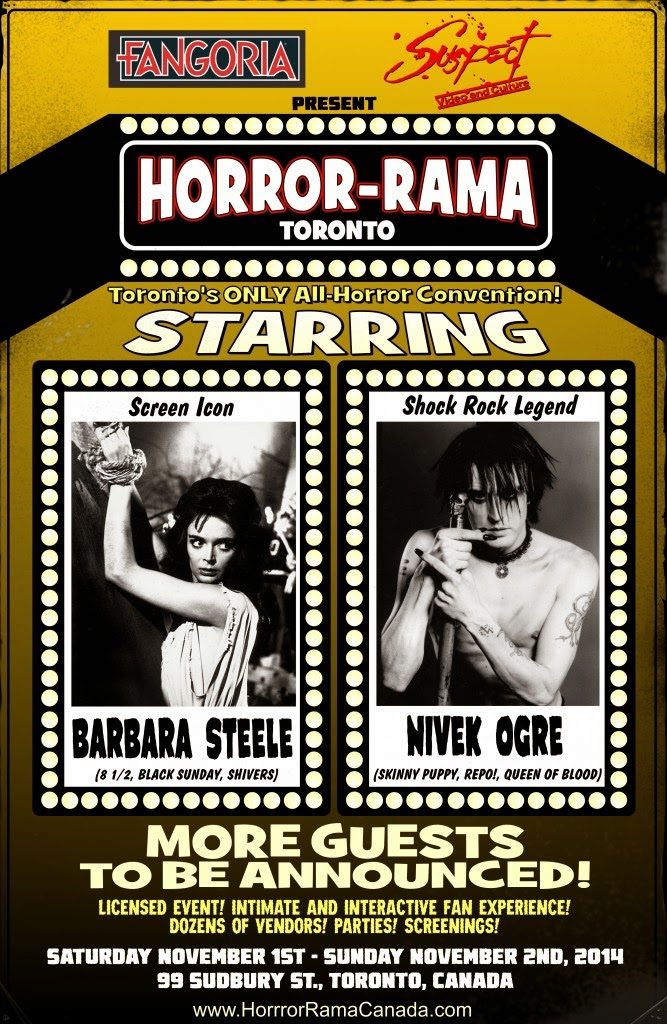 I am super excited to have another genre festival in the city. Fan Expo is fun, but each becomes more expensive and an increasing logistical nightmare, and it's a bit of a trek to get to the more intimate genre events in London and Niagara Falls. Horror-Rama is a much needed and welcome event, so big ups to Chris and Luis for getting it done. For more info and updates, check out the Facebook page here.


A while back, I posted about a cool viral campaign for a UK indie called The Lord of Tears. Well, this time the filmmakers took to an old abandoned hospital to scare the bejeezus out of some amateur photographers.


I love the guy who chose the third option - curl up and cry - in the fight or flight scenario. Watching this reminded me of my recent trip to Camp 30, and what Ali & I would have done if Owlman made an appearance there. The Lord of Tears released in Scotland last year, and is now available through their website.


This isn't really news, as much as it is just passing along something I discovered this week - the retro stylings of LazerHawk.


LazerHawk is an Austin-based musician named Garrett Hays who clearly loves 80's cinema as much as I do. I look forward to digging into his entire catalog on Bandcamp over the coming weeks.

Busy guy only got to ep 2 of the Walking Dead video game?

You are right that it picked up from the first installment to the second, but you will want to get to the 3rd one that's been out for a while too.

Great that Kenny was brought back. I went through the first game a few times and made different choices. His death could be varied, so the rollout of the events weren't completely separate from how you chose to play it.

Not the hugest fan of the TV show and its pacing, but Telltale really knows how to get across a good story in that world.

Yes, Telltale is knocking it out of the park. You're right, the game is better than the show, and even on par (if not superior) with the comic.