Doc Of The Dead

During its limited run in Toronto last week, my buddy Schwartz & I took in the recent zombie documentary Doc of the Dead. 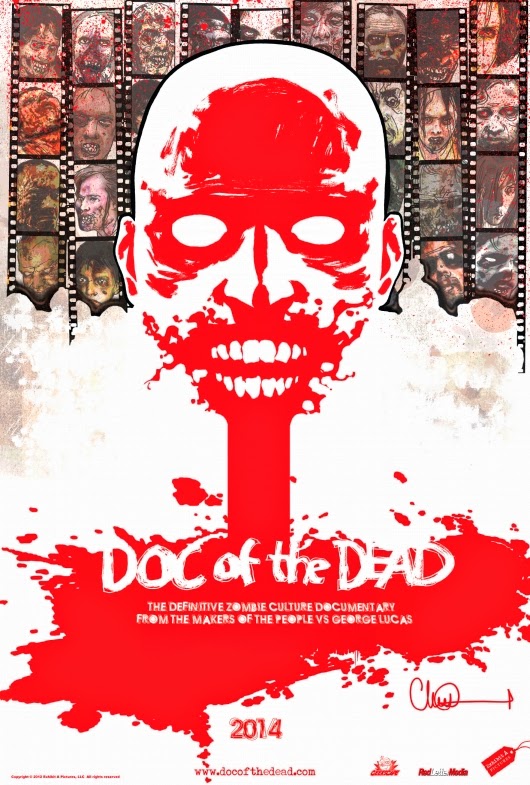 Directed by Alex O. Philippe (The People vs. George Lucas), Doc of the Dead delves into the worldwide phenomenon of the zombie.

This doc was a pretty good time. Whereas the other zombie doc I watched recently Birth of the Living Dead focused more on George A. Romero and his contributions to the genre, this one was a much more broad and all-encompassing look at the undead. It may not be as aesthetically pleasing as Birth, but its interviewees are many, including Bruce Campbell, Simon Pegg, Tom Savini and Greg Nicotero. The biggest insights, however, came from arguably the three most important figures in modern zombie culture, Romero, Robert Kirkman & Max Brooks.

There are an impressive number of things covered over the course of this doc's eighty-one minute running time, including the genre's ravenous and ever-growing fan base, the scientific, social and philosophical underpinning of the zombie as well as its origins in folklore – contrary to the literary beginnings shared by the rest of horror iconic figures. Even the heated debate between fast vs. slow zombies is discussed!

Being a fan myself, I'm obviously aware of just how pervasive zombies have become in pop culture over the last decade. The Walking Dead is the most popular show on television (save for maybe GoT), almost every city has a zombie walk event that draws hundreds or even thousands, and advertisers are now using the undead to schlep everything from phones to candy to courier services.

However, due to so many topics being offered up, Doc of the Dead did tend to meander a bit. I also thought the “comedy” skits added in for filler were pretty painful. It was only when talking about them with Schwartz afterward that I realized it was the same guy who did those elongated reviews of the Star Wars prequels a while back. Yeah, his material isn't as amusing when it doesn't involve hookers trapped in his basement. But, I digress.


Despite perhaps lacking direction, there was a lot of good stuff in there. It featured a lot of familiar genre faces and offered up some good observations about everyone's favourite flesh eaters.
Posted by Jay Clarke at 10:00 AM