If These Walls Could Talk.

Toronto After Dark has been wreaking havoc at the Scotiabank Theatre the last week, and I’ve been trying to catch as many flicks as possible. Fortunately, I saw a few of the films in the line-up at Fantasia, so I haven’t been killing myself with the commute.


The first movie that really grabbed me at the fest was Adam Schindler’s Shut In. 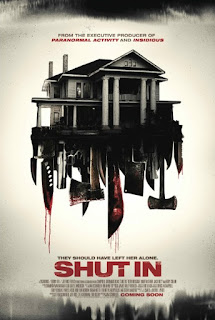 An agoraphobic woman is forced to hide inside her house when three men come looking for the money they’ve heard she is keeping on the premises.


I thought Shut In was a really tight thriller. It was very contained, and let the actors do much of the heavy lifting. The comparisons to Panic Room were valid, but I feel like Fincher’s works are often more about his style and less about his subjects. Here, Schindler takes a less flashy approach to the filmmaking and concentrates more on the arc of his protagonist, Anna played by Beth Riesgraf.

And Riesgraf is a true find. Already a veteran actor on television, Schindler said that she was the first person they auditioned and no one came close after that. She had to show real range in the movie and performed admirably. The other notable appearance is Martin Starr as the sadistic burglar Perry. Primarily known for his comedy work, he looked like he was having fun going in the absolute direction here – think the Dwight Yoakam role in Panic Room, except a bit less skeevy. He makes you forget his usual bespectacled nerd persona almost immediately.


It was mentioned at the following Q&A that the film was shot in an impressive fifteen days, Sure, it takes place in one location, a beautifully rustic house located in Shreveport, Louisiana, but ninety minutes of coverage is a lot to get in the can in that amount of time.

I think what I liked most about the film was that it had me the entire time. It took a turn in the second act that surprised me – surprised everyone, there was actual applause in the theatre – which is not easily done these days. The subject matter, in the hands of lesser filmmakers (or writers), could’ve been a real lazy or unpleasant affair, but even the more implausible moments were well executed due to its well-timed escalation.


The home invasion subgenre has become increasingly crowded in the years following The Strangers, but I think Shut In delivers enough of the goods to make it rise to the top.
Posted by Jay Clarke at 10:00 AM