As promised, here are some of the highlights from the Horror-Rama Q&A's. I sadly missed a few (Sybil Danning & Tristan Risk among them) due to my other responsibilities at Toronto After Dark, but I was really glad I got to see some of them.


The first one was filmmaker Mick Garris, which was really great. He's perhaps best known for being Stephen King's go-to adapter, but you don't really realize just how much stuff he's been involved with until it's all laid out. The talk did obviously begin with his dealings with King though.

On adapting The Stand;

“Adaptation is a difficult process. Film is external and fiction is internal. As for The Stand, when you look at polls of King's favourite books, The Stand always tops the list. So yes it was intimidating! I mean, imagine, I'm a relatively new filmmaker, the guy who'd made Critters 2 and Psycho 4 and this was (an adaptation) of the great American novel. But the good news was, I am not just a huge genre fan, or a huge King fan, but a huge Stand fan, so I cared about what happened to it as much as anybody else. The other thing that made it a lot better was that King wrote the script himself and it was phenomenal. That was the blueprint, and if you start with a good script you, if you're any good at all, or care at all, it's really hard to mess it up.”

On adapting The Shining;

“The Shining was my favourite book ever, certainly favourite horror book. And when I saw that movie (Kubrick's The Shining) I was so disappointed and so upset and angry and let down. Because, and I've learned to appreciate over the years as a great Kubrick film, but it's not a great King adaptation. So, when we went to do the miniseries, we didn't see it as remaking the Kubrick film. I was so passionate about the book, so when the reviews of the miniseries came out and they were really positive, it got even better reviews than The Stand which were overwhelmingly good, I felt satisfied that we finally got the tell the story in the book.”

He did say that he got maligned by some for that miniseries though.

“Some people hated me just for doing it, they said 'how dare you remake Kubrick'. We weren't remaking the movie, we were doing the book! I'll never forget one review I got. It said 'Garris is to Kubrick, as Peoria is to Paris.' Ouch! That's why if you're going to make material for public consumption, you need the skin of a rhinocerous.”

When asked if he could adapt any story of King's, what would it be, he said;

And when the moderator brought up The Long Walk;

“Well, it would be an amazing movie, and everybody seems to want to do it, but nobody ever does it. But, it's funny, it comes up every time I talk to someone about doing Stephen King.”

After talking about a few other King projects, Garris took the opportunity to announce a new project he has in the works called Nightmare Cinema;

“It is sort of a miniature Masters of Horror, we're doing five stories all together with five filmmakers. We're doing it on a very limited budget, and I'm not gonna tell you who they are, but I will say it is two Americans, including me, one Japanese director, one Cuban director and one British director. I'm really excited about this.”

The Q&A concluded with Garris speaking up bringing back his Post Mortem interview series.


“We are going to do a new series. It's not official, but I am going to start chasing some new interviews at the end of this month down in Mexico at a film festival there. I'm excited about doing these. This one will be a bit more travelly, we won't do the Charlie Rose-type black set and very formalized, it will be in somebody's house or office or hotel room, things like that.” 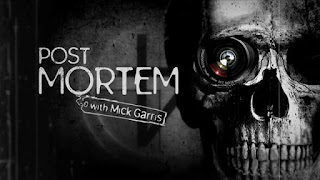 That night, there was a screening of Luigi Cozzi's 1980 Alien rip-off Contamination. As a special treat, star Ian McCulloch and composer Maurizio Guarini were in attendance to conduct a pre-show Q&A.

McColluch was honest about his work on the film;

“I did it for the money, and the locations. I must admit when I finally saw the film I was expecting the worst. But even though it's now quite cheesy and dated, it was thirty-five years ago after all, I must say it is rather enjoyable.”

Guarini had to agree and said that he'd forgotten most of his time working on the film;

“But with the Internet, and seeing photos, the memories are coming back to me. I remember getting left alone while doing the music. But yeah, the film isn't bad.” 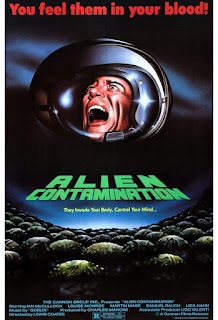 It had been a very long time since I'd seen Contamination, as well. In fact, truth be told, this was my first time seeing an uncut version as what I watched circa 1992, was the one featured on Elvira's Movie Macabre. McColluch & Gaurini are right. It's a little rough, but it's not without its many charms. And of course, the score is bangin'.

He began with his time working with the late Wes Craven, relating a story about how the snake wrangler in charge of a deadly “Super Rattlesnake” on the The Hills Have Eyes was not a snake wrangler at all, but just a dude with a pet snake a crew member had grabbed from a local bar.

Berryman also talked about his predilection to please when Craven suggested they go to a Drive-In where Hills was playing, have him dress up as Pluto and sneak up on the patrons in their cars. It was all in good fun until a seven-foot-tall thug came after him with a bat for “scaring his girlfriend”.

He talked at length about the upcoming release he was very proud of called The Storyteller, a feature film by the late Andrew Getty;

“This film is incredible. We saw it for the first time last week. It is so absorbing, it captures you. There are some camera moves... man, if you're into film at all, you gotta see Storyteller. The editor was working on this thing for ten years!”

He was asked about his experience working with Brandon Lee on The Crow;

“I was the Skull Cowboy, but the scene was cut from the movie. But I got to meet Brandon Lee. I got to work with him. I sat in his trailer with him for hours, we'd talk about his dad and where our futures were going and how much we appreciated this script for a movie we knew was going to be fantastic.”

“Brandon, in my opinion, died because of greed. It's not the company's fault. It's because it was a state that didn't want unions and outside labour. For instance, our armourer, our gun guy, was from California and well qualified. But legally they had to send him home and hire a local guy. Now you got a guy who's working on a major motion picture, and I'm sure he did the best he could, but the suits were pushing and in the end, it cost them a lot of money for the lawsuit in Brandon's death.”

Things got a little lighter when someone asked about his experience working with Ruggero Deodato;

“You're in a supermarket. You're looking at the cans. Ruggero would be the one with a dent in it.” 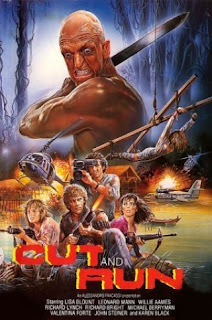 Last, but certainly not least, was perennial Scream Queen Linnea Quigley. The moderator ran down her greatest hits and she related tales from her time on classics such as Return of the Living Dead and Night of the Demons, as well as the cultier stuff like Sorority Babes in the Slimeball Bowl-O-Rama and Creepozoids.

When someone asked about how she got into the business, she said;

“I got into acting, kind of by mistake. I was working at a health spa in L.A and I worked with some models and they told me they were making a hundred dollars a day. That was a lot of money then, in the late seventies or whatever. So, they said 'why don't you come with us to our agent'. I did thinking nothing would come of it, but I started getting certain things. I started out doing modelling for movies that hadn't been made, they used to do the artwork first and sell the movie upon the artwork. Then I started getting like little roles, like where I'd have a line or be a featured extra. I took acting classes and did my homework too. It was a really slow climb, it wasn't overnight or anything, that's for sure.”

On reuniting with old friends on Trophy Heads;

“It was a really weird experience. Michelle & Brinke and I hadn't worked together in twenty-five years before David Decoteau's 1313 Cougar Cult (laughs) and it had been thirty or more since we all worked with Charlie Band. It was really nostalgic to do it. It seemed the same but different, you know? Everything was video now and instant and moving faster. It was really nostalgic, but in a good way, it wasn't like noooooooo.”

On working with young directors who grew up watching her films and if she finds they are better or worse than the old guard;

“Well, sometimes it's hard when the people that were fans are directing you because they're a little bit intimidated by you. And then they think you don't need any direction, or they're scared to give you direction, which is what you want. You want them to direct you, because you want to do a good performance. It's hard to say. On film it was such a harder medium, I think they were more dedicated to it. You couldn't do it again and again, so you had to do it right. One or two takes, or forget it. I don't know, there are some great directors that have come up now too.”

So, that was all I was able to sit in on. Thanks again to Chris & Luis for gathering all these great icons under one roof.
Posted by Jay Clarke at 10:00 AM