Toronto After Dark has always been very welcome of the indie film scene here in Ontario. There are dozens of significant filmmakers creating great content, and I am blessed to know, and in some cases worked with, several of them. Two such directors had their Toronto premieres earlier this week, the first of which being Gabriel Carrer with his rage-fuelled vigilante opus The Demolisher. 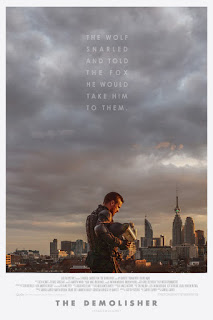 After his wife is crippled by gang members, Bruce (Ry Barrett) takes to the streets of Toronto seeking vigilante justice.


I have to say that I was pretty impressed by this. I was expecting a straightforward revenge yarn, but Carrer provided something much more brooding and insular instead. At the subsequent Q&A, he talked about the evolution of the project. Originally envisioned as a straight-up slasher in the vein of The Prowler, it morphed into something more along the lines of seventies/eighties revenge flicks like Death Wish and The Exterminator.


The Demolisher is a great looking film with a musical score by Glen Nicholls that adds much to the proceedings. Carrer wears his influences on his sleeve, everything from Mann to Refn to Carpenter, but perhaps the most striking presence in the film is the city of Toronto itself though. The Big Smoke is often used as a double for other cities, so it was really awesome to see it front and center as a gritty metropolis. The chase sequences through empty streets and buildings had a surreal quality to them, as this city rarely gets that quiet – though truth be told some bits were shot in neighbouring municipalities.

This was a mood piece with sparce dialogue and a narrative largely told visually, a task for which the three leads, Ry Barrett, Tianna Nori and Jessica Vano were more than up to. I could see they were all one-hundred percent invested in conveying the abject anger and desperation of Carrer’s cinematic world. I’ve worked with Barrett in the past, and I’m so glad to see he has now graduated to the lead roles he deserves.


The Demolisher is not without its issues though. There is suitable exposition to glean the character's motivations, but they could’ve been expanded on to give the piece more dramatic weight. And because the film begins with Bruce’s crusade already in progress, there is no real arc or escalation. It was a superhero (or supervillain depending on how you look at it) movie without the origin story. However, because I was engrossed in everything else, I wasn’t too bothered too much.

Carrer’s skills as a filmmaker are increasing with each subsequent film, and as his tools and budgets get bigger, I expect so will his cinematic ambitions. I look forward to see what the future holds for Latefox Pictures.

Be sure to come back tomorrow when I discuss the other local premiere I dug, Trevor Juras’ The Interior.
Posted by Jay Clarke at 10:00 AM