Welcome To The Family.

Things got so crazy with my latest project, I never got to tell you how you the latest edition of Fright Night Theatre went. The answer is very well. I was particularly proud of the short film programme we put together this year, but I think I’ll post about all the tremendous shorts I’ve seen over the last few months at a later date. 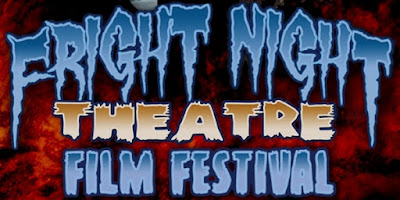 As  for the rest of FNT, in addition to seeing Neil DiLiberto’s Nova Seed for a third time (man, I adore that movie) I also took in Scott Schirmer’s newest release, Plank Face. 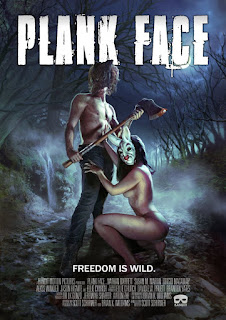 While out camping with his girlfriend, Max (Nathan Barrett) is captured by a family of feral cannibals and forced to adopt their primitive way of life.

Schirmer and his crew at Bandit Motion Pictures have served up another bizarre and uncompromising tale here – and no, that will not be the last cannibal pun you read here. I thought how the film explored the idea of family, that it is an instinctual constant no matter how civilized the subjects, was really fascinating. It could be the best representation of this I’ve seen since the bar was set in the nineteen-seventies.

As this movie progresses, we witness the stripping down of the protagonist and his gradual indoctrination into the family. Perhaps the most impressive part of this was that it was done with very little dialogue with almost none past the first act. As we’ve come to expect from Schirmer, there was tons of gore and nudity, but in this movie, it rarely felt exploitative. I feel that is one of his strongest talents, as his more provocative sequences (in Harvest Lake and this) always seem to have purpose and make sense within the narrative that he is spinning.

However, the real reason all of this works is the up-for-anything cast that Schrimer assembled for Plank Face. Whereas most of the cast was made up of locals and referrals, Nathan Barrett was a complete question mark going into production. They had to take his word that he would be cool with “being put through hell”. In the end, he exceeded expectations, as Barrett handled the emotional and physical challenges of the role pretty much as well as anyone I’ve ever seen.

As for the family, they were all one-hundred-per-cent committed, but I especially liked Bunny Girl (Alyss Winkler). Her animal-like, yet playful physicality drew my eyes to her every time she was onscreen. Ellie Church was as stalwart as always here, and having also done the hair, make-up and costume work for the project, she remains one of Bandit Pictures' most reliable and important assets.

Back as cinematographer on Plank Face, was Brian Williams. While this wasn’t as visually pleasing as Harvest Lake, he still beautifully utilized the Indianian forest well. Those two films were actually shot in the same area, barely one season apart, but it’s quite shocking how different they look. It just goes to show how much of a difference a colour palette can make to a movie's essence.


I’ve got to hand it to Bandit Pictures, they make perversely engaging films. And while it is true their subject matter might not always be easily digestible (there it is!), I really admire how bold and unique they are. We need more of that these days.
Posted by Jay Clarke at 5:00 PM