As  has always been the tradition at Toronto After Dark, Saturday night belongs to the undead. 2016's edition brought us flesh eaters from the UK and South Korea in The Rezort and Train To Busan, respectively. 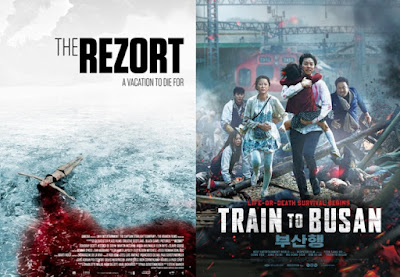 The Rezort came first, and the easiest way to describe it is Jurassic Park with zombies. Coming a few years after society has regained control of a worldwide outbreak, well-to-do types pay to vacation on an island where you can shoot up shackled zombies. That is, until a zombie-rights hacker shuts down the system and lets them loose on the inhabitants.

This movie was nothing to write home about, but considering its juicy setup and lush locale (Majorca) it would've been really hard to screw it up. The characters were fairly stock, but the zombies looked great and they got shot up a lot. Like, a lot. If you're cruising Netflix and looking for something to scratch that undead itch, you could do a LOT worse, trust me. 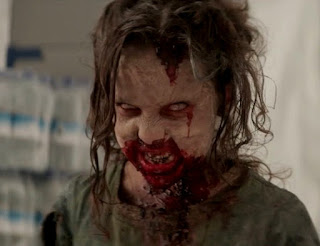 Moving onto the real meat, the second film was Sang-ho Yeon's Train To Busan. I actually watched this a few months ago when it played a limited run here, but I had no qualms about seeing it again at TAD, as it's a super fun ride. It's basically about a zombie outbreak making its way onto a train travelling from Seoul to Busan. If you dig zombie movies, this has basically everything you'd want and once that train leaves the station, it doesn't let up.

With its confined spaces, I thought the unique setting of the commuter train added a layer of tension that worked really well. And you're in luck if you like your zombies fast, as these fuckers are bad-ass. Going from still to feral death machines in mere seconds, I really liked the crunching and kinetic physicality of this particular brand of ghoul. With some digital assistance there were some really striking images of mass numbers tearing towards their prey, and fortunately never looked as cartoony as it did in World War Z. 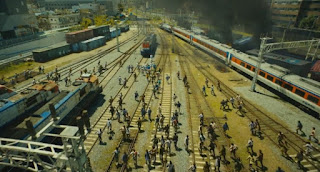 More importantly, and frankly impressively, Train To Busan featured an unusually high number of likable characters to root for. The comic timing and dialogue was on point and there were some exchanges that were funny and touching in equal measure. You can tell you've won over an audience, when there are audible gasps and exclamations when people start falling to the zombie horde. Utilizing a really terrific cast, most notably Dong-seok Ma, Yu-mi Jeong and Kim (damn that kid can cry), Yeon was really able to tug at the heartstrings.

Yeon (in this as well as Seoul Station, his other project this year) also injected some social commentary into his zombie tale, as class struggle and paranoia were ever present. His message was more prevalent in Station (and its homeless population metaphor) but Yeon didn't shy away from humanity's uglier attributes here either.


This is a must watch in my opinion. It delivered on its premise and built tension not only from its snarling antagonists, but also the constant endangerment of characters we had grown to like. All aboard Train To Busan!
Posted by Jay Clarke at 10:00 AM