The House On Jump Scare Avenue

On  the second last night of Toronto After Dark, I checked out the indie From a House on Willow Street from South Africa. 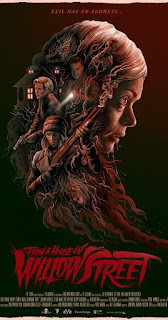 Four petty criminals kidnaps a woman for ransom, only to realize their captive may not be as helpless as they thought.

You know, every time I hear about a “kidnappers get more than they bargained for” movie, I always wonder if someone has finally done the languishing script I've been picking at for twenty-some years. But no, as per usual, it started off similar and then spiralled off in a different direction. Overall, I thought the idea of Willow Street was sound, but the execution was a little lackluster. Once it got beyond the potential of its premise, it fell into themes that have been mined before in better movies.

But first, some positives. Due to some impressive locations and production design, Willow Street looked great. The monster designs were solid, even if they did feel like extensions of stuff we've come to know from the Resident Evil franchise. Apart from some CG towards the end, I had no problems at all with the way this movie looked.

Sadly, the main takeaway for me was just how exhausting the sound design was. I mean, I actually lost count of how many jump scares there were. It was like the filmmakers didn't have enough confidence in their visuals and decided to just add a loud noise every few minutes. It was incredibly frustrating because not only are there so many other horror movies that use this lazy crutch, but there are far superior ways to create tension. I'm not saying you can't use jump scares, but it's a matter of quality, not quantity. It really does take away from the picture as a whole if you abuse it.

At the end of the day though, Willow Street was just a couple of guys from South Africa working their fingers to the bone to make a horror movie, so good on 'em. Despite its problems, it still managed to be a step above most of the standard studio fare that gets churned out. I just hope director Alastair Orr and company can incorporate a little subtlety into their next venture.

*Q&A photo courtesy of Toronto After Dark
Posted by Jay Clarke at 5:00 PM