Shifting to monsters of a different sort, Toronto After Dark screened Billy O’Brien’s I Am Not A Serial Killer on Monday night. 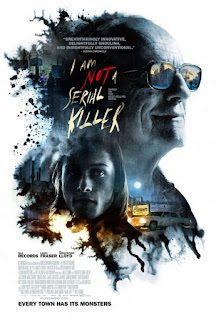 A troubled youth named John (Max Records) becomes obsessed with a serial killer that has recently set up shop in his small town.

Eleven years ago at TIFF, I saw O’Brien’s debut Isolation, a dour science-gone-wrong tale that never really got the recognition it deserved in my opinion. So, I was pretty chuffed to hear that he was back with another film that was being received well on the festival circuit. And I’m even happier to say that I Am Not A Serial Killer is another winner.

I loved the feel and locale of this movie. Set largely during the Midwestern winter, the comparisons to Fargo are justified, though I am glad that O’Brien kept the quirk to a minimum. This was a really poignant representation of a young sociopath being pushed to the edge by external forces. As someone who spent a good deal of my adolescence with a dark cloud over my head, I identified with a lot of what was going on here. Much like my experience with Scott Schrimer’s Found, it tapped into something really personal and went beyond with a ‘what if’ scenario.

The performances in I Am Not A Serial Killer were solid across the board, but most of the praise obviously goes to Records and Christopher Lloyd. Records seems to have survived the Hollywood transition from child to adult, as he gives a wonderfully reserved performance here. In amongst his cold and withdrawn demeanor, there was a wry sense of humour in John that came out whenever he was trying to hide his true feelings. It was almost heartbreaking to see how hard the character was trying to be “normal”, even though we all know that you eventually reach an age where you realize that there is no such thing. No one is normal, just different degrees of fucked up.

It was also amazing to see that even in his late seventies, just how much gravitas Lloyd still has onscreen. His wise and reflective conversations with John were just great to watch. Man, it looked bitterly cold during some of his scenes, and he didn’t seem bothered at all.

I Am Not A Serial Killer was a coming-of-age tale, but it's also a mystery as well, so the less you know the better. However, I didn’t feel like there were really any big revelations that weren’t either already fairly evident or at least revealed very early on. Sometimes people get hung up on that stuff when they should just be concentrating on the more personal aspects of the story.


I don’t think it's going to blow anyone’s mind, but I thought I Am Not A Serial Killer was a really solid indie. It’s well acted and paints an unsensationalized portrait of living with mental illness.
Posted by Jay Clarke at 10:00 AM