Toronto After Dark's mandate has always included showcasing short films from Canada and around the globe, and this year was no different. Here below were some of my favourites.


After his powerhouse of a short Point Of View last year, Justin Harding has followed it up with another winner. Kookie, anchored by a comically adept young lead in Ava Jamieson and the scariest cookie jar you've ever seen, delivers both the laughs and scares. Harding is killing it right now. 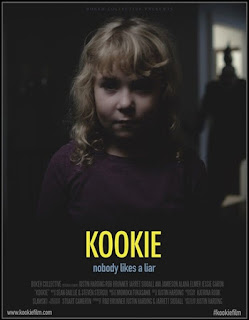 I was also glad that TAD played Greg Jeffs' It's All In Your Head. We programmed this at Fright Night Theatre last month and its wonderful turnabout is the precisely the reason I love watching short films.


The action short Olga from Quebec featuring veteran stuntwoman Naomi Frenette was easy for me to get behind. She absolutely kicked ass in this and I hope to see her in more projects soon.


For me, the most visually resonant short that played this year was Tim Egan's Curve. Immediately putting the viewer in peril, it's a short that makes you feel physically uncomfortable.


And speaking of uncomfortable, there was also Anthony Cousins' When Susurris Stirs, but for a very different reason. If this one doesn't make you cringe, then you are made of stone. Also back this year, was Brit Oliver Park with his new chiller Still. He is another filmmaker who is mining gold from the home invasion subgenre boom.


Lastly, there was Dianne Bellino's beautiful stop-motion animation short The Itching. I don't think I've ever seen the plight of social anxiety better represented than it was here.

It was not only a strong year for shorts at TAD this year, but there was also a wide range of stories, themes and tone that hit us with a little bit of everything. Well done, guys!
Posted by Jay Clarke at 5:00 PM