My Toronto After Dark experience began this year with Black Fawn’s newest venture, Let Her Out. 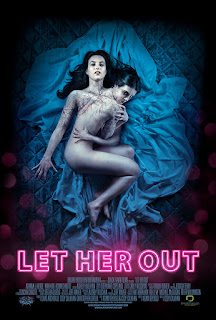 After a biking accident, Helen (Alanna LeVierge) starts having nightmares and black-outs that leads her to believe there is someone else inside her head – and they want out!

I felt, decidedly somewhat ironically, that this was a movie of two halves. I had a few uh-oh moments during the first act when an unnecessarily chaotic opening was followed by some pretty stiff exposition. However, once all of the clumsy stuff was out of the way, Let Her Out seemed to do just that and kick into another gear. It was then I started enjoying myself.

As one might expect, the paramount reason this movie worked at all was due to its lead, Alanna LeVierge. She brought an incredible physicality to the role that almost comes out of nowhere when taking into account the severe escalation of her affliction. It was one of those dual performances that made me question if it was indeed the same actress at times. Obviously, make-up was a factor, but not enough to take away from LeVierge's significant acting chops.

Speaking of the make-up effects, they were rock solid here. Effects artist Shaun Hunter has so vastly improved over what he has doing just a year or two ago that I think his work here stacks up against anything we’ve seen recently. In addition to the bloody climax, there was also a fantastic little set piece on a subway platform. It was the perfect example of effects, camerawork and performance coming together to create something really bad-ass.

Lastly, I just wanted to mention that I appreciated how Toronto was represented. Let Her Out was set here, and made no bones about it, as evidenced by the ample shots of the city’s skyline. Granted, Niagara Falls and Guelph were also utilized, but Toronto is pretty unmistakable when you see it. We need more filmmakers (Denis Villeneuve’s Enemy is perhaps the greatest recent example) using this city as a backdrop for their darker tales. We have our demons too.


So despite Let Her Out’s shaky start, I think it redeemed itself by the end. While it’s true we’ve seen these themes played out before, there was a cold, dark and yet colourful coat of paint on this that made it it’s own beast.
Posted by Jay Clarke at 10:00 AM