I went to a screening of a little eighties horror movie called Night Warning last weekend. As I mentioned previously, I was familiar with the coverbox, but had never seen the actual movie until now. 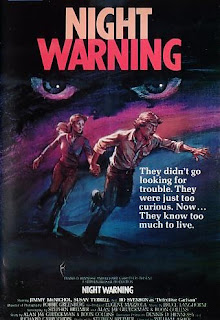 When Billy’s (Jimmy McNichol) parents are killed in a car crash, his Aunt Cheryl (Susan Tyrell) raises him like he was her own. Only Aunt Cheryl’s feelings for Billy go a bit deeper than parental love and she is willing to do anything to keep him by her side.

Night Warning is a crazy little film. I have to say that I was slack-jawed for some of this movie. I just found the subject matter really… whats-the-word – GROSS! I give full props to Susan Tyrell for inciting this emotion. Her leering glances and escalating psychosis served to make me uncomfortable often. Blood and guts are one thing, but a scenario where a mother feels ‘that way’ about her son is just… ICK! The movie actually gets quite bloody towards the end. It reminded me of Inside a little bit. Obviously, there is nowhere near as much red stuff as that French nerve-shredder, but the similar parade of unfortunates crossing the path of an unstable matriarch recalled it to me. Again, it is Susan Tyrell that keeps this movie on the rails in parts where it could have been a train wreck. I mean sure, there is some camp to be had, but the subject matter kept it from being overly comical – at least to me. 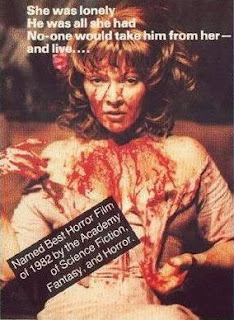 You know what the funny thing is? The biggest villain of the movie isn’t the mother, it’s the investigating cop. She’s the one running around killing people, yet Detective Carlson’s (Bo Svenson) seething hatred of gays – which he believes Billy to be – is the thing that really took me by surprise. I don’t think I’ve seen a bigger homophobe onscreen before. His behaviour becomes outrageous towards the end as the way he carries himself just isn’t acceptable behaviour in this or any age – or at least I hope not. Maybe that shit still goes on down there, I don’t know. After watching the movie, I had a discussion with a few friends about the title. Why is it called Night Warning? It doesn’t really have anything to do with the movie. I mentioned that sometimes different markets retitle movies for whatever reason, but none of the other titles were much better. See for yourself…

-Mrs. Lynch (ok I guess)
-Butcher, Baker, Nightmare Maker (wtf?)
-The Evil Protégé (what protégé?)
-Momma’s Boy (I guess this would be the best one of the bunch)
-Thrilled To Death (huh?)

Lastly, a young Bill Paxton shows up in the movie as one of Billy’s school rivals and Britt Leach appears as the asshole cop’s partner. That means that Night Warning scores a TWO on the scale of people-that-were-in-Weird-Science. That’s reason enough to see it right there!
Posted by Jay Clarke at 10:11 AM

is an incredible title!