I finished Max Brooks' World War Z this week. A friend of mine lent me the book over a month ago. Darryl had this look in his eye while he was handing it over, as if to say, 'I can't believe you haven't read this yet'. Now I know why, but more on that later. In fact, I never actually READ it. I wanted to, but there it sat indefinitely being pushed back for some movie, event, TV show or video game. I mentioned this to Schwartz at some point and he was kind enough to lend me the audio book. For that I am eternally grateful because not only was I able to get through it at a ravenous pace (mostly during trips to and from Toronto), but the presentation of this was really something special. 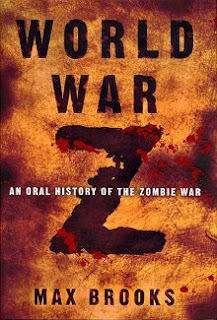 So, first off, I now share that look of surprise I'd never read this until now. I mean, sure I knew of World War Z, but I didn't really understand WHAT it was. I thought it was a diary of some guy holed up in a cabin, or maybe a group of survivors ala The Walking Dead. I had no idea that the story was so GLOBAL. It covers every detail of how a zombie apocalypse would play out. I tell you it was chilling. Every single angle, whether it be political, social, economical or militarist, is considered along with every class and creed. As a person who daydreams often about this scenario, it was quite an eye-opener. Max Brooks totally destroyed my theory of heading North and staking claim to a bit of land in Northern Ontario. It never occurred to me that EVERYBODY else would have that idea and that sparse and uninhabited wasteland would become Woodstock pretty quickly. I appreciate the heads-up Maxwell, but man, way to take the fun out of the end of the world! Another impressive thing about the audio re-telling is the stellar voice cast they assembled. Stand-out stories include those told by Mark Hamill (for those who think he has disappeared after Star Wars, rest assured he is making a decent living doing voice-over work – and with good reason), Henry Rollins, Alan Alda, Eamonn Walker, Rob Reiner and Michelle Kholos. I'm actually glad that I first experienced the book this way, because it's so much more effective to hear the different voices, rather than just my own. 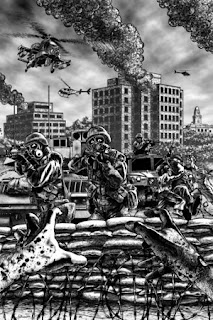 This book is spectacular, but you want to know what the icing in the cake is? The vernacular. The way in which the people in these stories speak. They use terms and abbreviations that don't exist in our reality, like referring to the infected as 'Zack', 'Zedheads' and 'Gs' and names for other dangers outside the living dead, like 'quislings' and 'ferrals'. Even references to past events like 'the brushfire wars' serve to add an extra layer of authenticity to the proceedings. I guess the only negative to listening to the book was the abridgment. There are a few bits that were cut for the audio version, but it is a small price to pay I think. I'll give the editors the benefit of the doubt on that one.

I'm definitely going to check out Max Brooks' other work The Zombie Survival Guide now. If it is as definitive as World War Z was, I might just have to keep it under my pillow. Because you just never know.
Posted by Jay Clarke at 12:51 PM

Yeah World War Z is great. I had a very similar experience. After a number of friends exclaimed out loud "You haven't read WORLD WAR Z YET????!!" I finally "cheated" and downloaded the audio book.

Having actors like Alan Alda, Mark Hamill and even Mel Brooks (to name a few) really helped bring credibility to the tome.

I tried to get through The Zombie Survival Guide a few years back but it was so clinical that I didn't find it enjoyable and never finished. World War Z really is Max's opus. Great stuff.