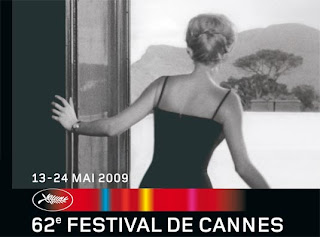 Another Cannes Film Festival has come and gone and here are some of the tasty genre treats that I'm sure will be coming our way soon.
Park Chan-wook, the man who brought us the deliciously disturbing Vengeance Trilogy, has taken on the horror genre - more specifically the vampire oeuvre - in his newest film Thirst. You can be sure this film will be visually stunning and have some sort of crazy twist hidden up its sleeve somewhere. Thirst came away with the coveted Jury Prize at Cannes this year.

AntiChrist, Lars Von Trier's newest film also played at Cannes last week. Unfortunately, this film was immediately compared to another movie - which I won't reveal here - and in doing so, kind of inadvertently gave away the ending. It would be like if somebody compared a movie to the old Twilight Zone staple 'Occurrence At Owl Creek Bridge'. You would naturally surmise that said movie was a moment of death daydream of the main character. Then again, someone told me before I saw Martyrs that the last half was a woman being beaten, and it didn't hurt my viewing experience... didn't HELP it either, but it didn't hurt. Regardless, I'll see AntiChrist of course, because I'm interested in the style glimpsed in the trailer. Plus, as you are probably aware by now, I am a glutton of punishment.
The French film Ne Te Retourne Pas has been given an English title. The Monica Bellucci/Sophie Marceau thriller will henceforth be called Don't Look Back. I'll never tire of seeing Bellucci onscreen. There is no English trailer yet, but those of you who speak French can view it here.

Then, there is Gaspar Noe's new film Enter The Void. This film scares me a little. Okay, a lot. And it's not even a horror film. At least, I don't think it is. I know it comes from the mind of the man who brought us Irreversible, so it will at least be horrifying. I mean, what is the crazy fucker going to do to top the soul destroying depravity of his last film? Well, indication number one was that at the premiere, word came out that Gaspar personally shooed away some kid actors that meant to attend the screening. Indication number two was Colin Geddes' (the programmer of TIFF's Midnight Madness) first tweet after emerging from the theatre began with quintuple expletives. I expect this to be here come September and God help me if I buy a ticket.
Posted by Jay Clarke at 7:44 AM