I was glad to hear that Amityville II: The Possession was this month's Final Girl Film Club selection. In her call-to-arms post, Stacie made allusions to the fact that many people feel this second film is the series' best. I've had a sneaking suspicion for years that this might be the case, but had not yet had the opportunity to revisit the movie and confirm this for myself. Well, hooray for the FGFC! Now, I'd be able to put this theory to the test. 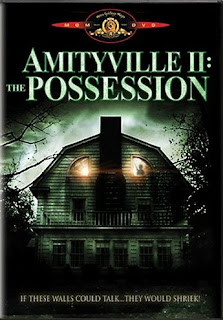 I'd say that is probably about right. The Amityville movies – beyond the iconic house – have never been as high profile as a lot of the other touchstone franchises, but the second movie is the strongest. The first movie seems a little dated now and the third, with its 3D gimmick, was just silly for the most part. After that the series just became the cinematic equivalent of Friday the 13th: The Series with unlucky families encountering cursed objects that formerly resided in the original house. There is also the fact that the scenario presented in Amityville II seems the most plausible of the bunch. Again, as seems to becoming the status quo when I re-watch movies I saw as a kid, it is mind-boggling just how much I forget. I still remembered the incest though. That's the kind of stuff that just rattles around in your psyche forever. Even as an eight-year-old, I could tell that seduction scene was not right and it was no less uncomfortable to watch now. Although, now I found Sonny and Patricia's (played by Jack Magner & Diane Franklin, respectively) relationship was a little bent even before the shit hit the fan. I mean, ewwwwwwww! And the ENTIRE family is dysfunctional. That was another thing that had escaped me. Talk about a loveless marriage! Then again, Burt Young really isn't the most attractive man in the world, is he? How this couple ever lasted to have FOUR children is beyond me. And the two youngest kids always seemed to be on the verge of killing each other. Thankfully, they focused more on the little girl because I don't think the kid playing the boy was even aware there was a camera rolling film on him. 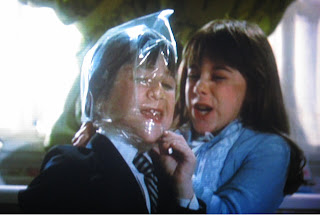 Awww, they're so cute.

Why is it haunted homeowners always seem willing to wait it out rather than pack up and leave? The secret room in the basement filled with sewage and flies should have been your first clue. How about instead of thinking of turning it into a gaming room, you get the fuck out of there before the walls start bleeding. Even though the production values made it feel like I was watching a TV movie, the direction by Damiano Damiani was sound. I noticed some similarities to Sam Raimi in terms of camerawork. Even though Amityville II and The Evil Dead would have been made around the same time, the resemblance between these two shots is uncanny, wouldn't you say?


The film ultimately runs out of gas though. Once the big 'event' happens, it seemed like it was floundering around looking for a conclusion, until someone decided the cull one from The Exorcist. That's okay though, because there was a nice makeup set piece at the climax that made it worthwhile. If you slide in some other little bits like the entire arsenal of firearms just lying around in the basement and the defense lawyer with the finest moustache in the history of film, you've got yourself a serviceable horror yarn. 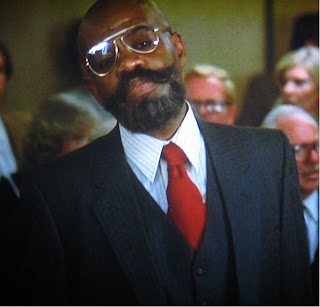 Amityville II: The Possession was certainly worth revisiting. It peters out towards the finish line, but it certainly doesn't sugarcoat the disturbing subject matter and overuse the usual theatrics present in most haunted house flicks.
Posted by Jay Clarke at 7:49 AM

I wanted to review this for the film club. It has been a long time since I have done a film club review now. I have it on VHS so I was going to see if I couldn't find it and watch it that way. But, it got lost somewhere in my head, along with a million other things, before I could get around to doing that.

I have watched it before, it just has been a long time now. Like you, I still remember the incest part of the film. And how well the family didn't get along for the most part.

Could you email me at mermaidheathertx at aim.com? I have question!!

Sure, will do! Just give me a bit to install Aim ;)