Wow, my brain is overflowing with all the news that came out of Cannes this week, but more on that later. For now, here's what caught my eye this week.

Some more promo posters for the second season of True Blood appeared online recently. Below, is Miss Paquin steamin' it up. Click here for the rest of the stills, courtesy of Icons Of Fright. The new season begins June 14th on HBO. 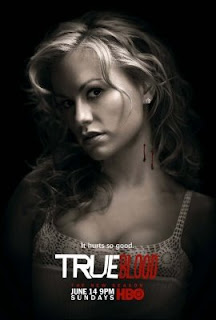 Raimi On The Red Carpet.

Just a few more days to go before Sam Raimi's Drag Me To Hell is unleashed on us all. This is an important one for the horror genre folks, and I await it with a mix of excitement, nervousness and anticipation. Wait, are all those the same thing? Oh well, you get the idea. THIS IS A BIG DEAL! Anyway, Bloody Disgusting caught up with Sam at the red carpet premiere this week and here is what he had to say about his return to horror.

"It did remind me of how much I love horror movies. I love building horror suspense sequences. I love the craft as a storyteller of trying to be aware of where the audience is and what they’re expecting – sometimes giving it to them, sometimes giving them something else. I really enjoy playing that game with them…”

More Horrors From The French.

So, in addition to The Horde and The Pack, it looks like we have one more promising French horror flick coming this year. The trailer for Vertige aka High Lane appeared this week. There are no subtitles at this point, but I think you can get the jist. Vertige has been described as a cross between The Descent and Deliverance, so that alone makes me take notice. Well, that and it's French. Check it out below.
Posted by Jay Clarke at 11:58 AM