In 2005, I saw a cool little indie called Lightning Bug. The story about a horror fan growing up in a small town really resonated with me and I could tell that it was an extremely personal project for director Robert Hall. Recently, his latest project Laid To Rest hit video store shelves and while I was at Serena’s this week, she felt compelled to show it to me. Not because it was good, mind you. I think she was hoping I might be able to make some sense out of what the hell was going on in it. I’d have liked to be the proverbial knight in shining armour on this occasion, but alas I was just as confused. 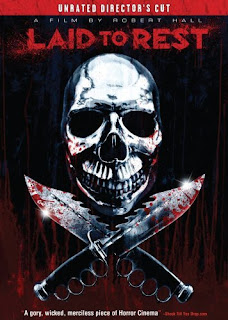 What the hell IS going on in this movie?

The most frustrating thing about Laid To Rest is it could have been a good film. There are so many things that can be overlooked when watching a horror flick, but bad editing is not one of them. And I’m not talking about annoying MTV style shaky cam; I’m talking about coverage. The camera rarely seems to be where it should be and even the sound cues seem off. The script is no help either, so you are just left pin wheeling from scene to scene with only the gore to keep you interested. And that gore is Laid To Rest’s one saving grace. Although, with Hall having over seventy effects credits to his name, you would kind of expect that, wouldn’t you? It is Hall’s impressive resume that is likely behind how he was able to recruit so many recognizable faces for this. Showing up in relatively useless cameos are the likes of Lena Headey - presumably from their collaboration on the Terminator TV show - Johnathon Schaech & Richard Lynch. The latter half of the movie features Roach from The People Under The Stairs, the bald guy from Lightning Bug and Hall’s real-life wife (Bobbi Sue Luther) running around town trying to find a phone that works – and that isn’t password protected. And speaking of Luther, I was a little disappointed that her best 'assets' weren’t unleashed at some point. 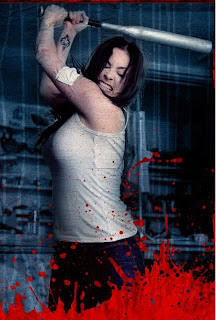 I think the killer hit her over the head about ten seconds too soon in that flashback sequence. Things were just about to get interesting. Boo-urns! Although, Serena and I also watched the 1974 'thriller' Centerfold Girls that night and with its drink-when-you-see-boobs nudity levels, I think everything balanced out in the end. I will say that the villain (named Chromeskull) in the movie did look cool, but that was completely negated when he was killed off in one of the lamest 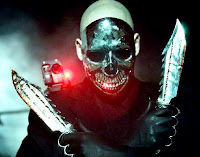 ways ever put to film. I feel bad about lambasting Laid To Rest because I saw Robert Hall at the Festival Of Fear in ’05 when he was promoting Lightning Bug and he seemed like a really cool guy and very passionate about his craft. He’s a very talented effects man, but as a director...

I say that unless all you look for in a horror movie is gore, Laid To Rest belongs… wait for it… in the ground. ZING!
Posted by Jay Clarke at 10:13 AM

BUT, bad direction and cinematography gets on my nerves. It's interesting that you didn't like this because most others acted like it was the best thing ever made!

Yeah, I know. We were wondering about all those favourable blurbs... they must have seen a different movie.