As they are wont to do, the Laser Blast Film Society busted out another VHS oddity last week at The Royal called Unmasked Part 25.

I hadn't even heard of this movie before co-curator Peter Kuplowsky brought it to my attention. That's just another wonderful thing about the home video boom. There were so many movies produced during that period that even with the world having shrunk with the advent of Web, you'll never stop discovering ones that slipped under the radar. I mean, there are still hundreds of B-horror flicks that have never been ported to DVD, right? And Unmasked Part 25 is one of those rare gems. Unmasked Part 25 was clearly meant to be a Friday the 13th spoof, but it's so much more than that and way ahead of its time. There had been slasher spoofs by 1988 of course, but nothing that had reached beyond Zucker Brothers-style antics. Instead, this movie slipped a weird Beauty & The Beast fable into its mass murder. While it's true The Toxic Avenger played this same card four years earlier, I can assure you that movie was nowhere near as eloquent as Unmasked managed to be.

What makes Unmasked Part 25 so bizarre was that it worked when it shouldn't have. The movie was rife with dry British humour, with some scenes, like Jackson & Shelley experimenting with S&M, stretched so long they ultimately succeeded through their sheer commitment to the joke. The same goes with the dialogue, of which there was a surprisingly large amount. Jackson laments often about his lot in life, half of the time through a hockey mask and the rest through extensive make-up, so it's really a testament to Cox's performance that this whole thing doesn't go south. I mean how many slashers do you know that bust out Byron and Shakespeare without batting an eyeball?

So, with all this levity and introspection, you might think that this film would be light on the gore. Not so! Quite the opposite, as the kill scenes were actually quite brutal. Jackson's first kill involved him peeling off some poor dude's face, then ripping out his heart with his bare hand. The effects were provided by Image Animation, who had just come off Hellraiser II at the time, so that should give you an idea of what was on tap here.

It is amazing to me just how little information there is on Unmasked Part 25. Sure, there's a shitty rip on YouTube, but no trailer anywhere. I find it hard to believe this film didn't make a bigger splash, as there's no way, once you've seen it, that it will slip your mind. It was a UK production, so it's possible it's more popular across the pond, but I would have thought its connection to the most prolific horror franchise ever would've at least given it some traction here.

Whatever the case, this was a great little movie. We were lucky to have the writer, Mark Cutforth in the house at the screening and he seemed as surprised as anyone that people came out to watch his little film twenty-five years on. He was also super chuffed about the VHS cover that was made (by Steve Manale) for the screening as he was never happy with the official one on its release. 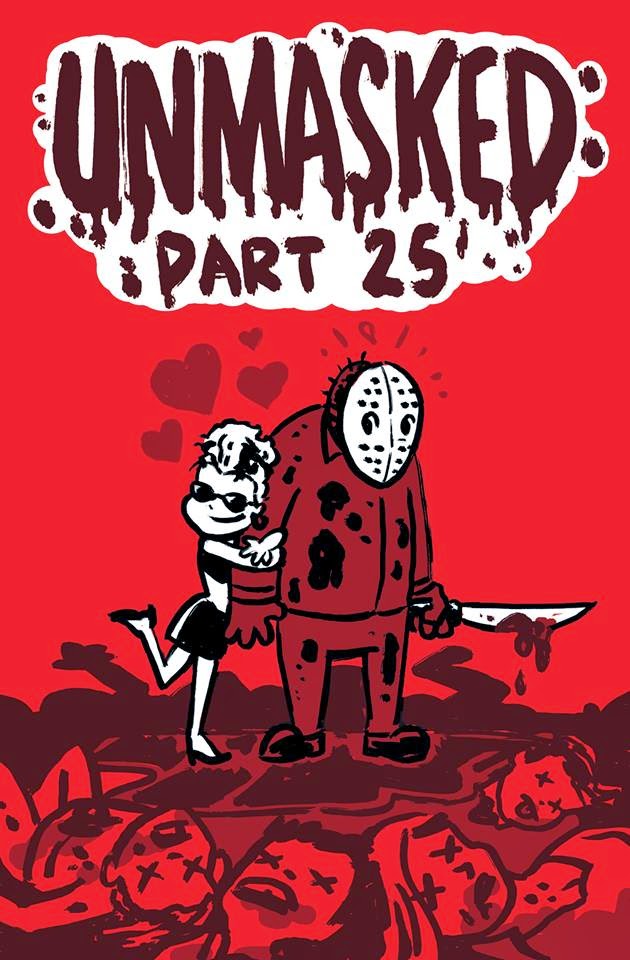 Unmasked Part 25 was solid fun, and a great lead-in to what came next. But more on that tomorrow...
Posted by Jay Clarke at 10:00 AM