The Power Of Restraint.

The closing film at Blood in The Snow this year was Nick Szostakiwskyj's Black Mountain Side. 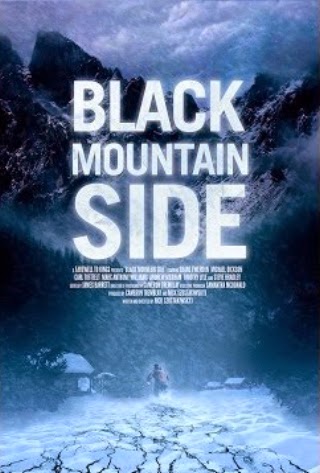 After a group of archaeologists working in Northern Canada unearth an ancient structure, some of them start to fall ill with an unknown sickness. Did they uncover something else with their excavation?

I enjoyed this film quite a bit. It had a very slow pace, so the fact that it held my interest throughout really speaks to the skills of the filmmakers. It's not surprising, as the camerawork (which picked up Best Cinematography at the fest) always gave me something to look at. Whether it was the gorgeous wide shots of the compound or the fantastic long take during the climax, my eyes were always engrossed. Another bold, yet brilliant choice was the lack of music. Music is usually integral to a genre piece, but its absence here seemed to fuel the growing dread and paranoia felt by the characters.

Now, comparisons to The Thing and The Shining were accurate, but the film that Black Mountain Side most closely mirrored was Larry Fessenden's 2006 flick The Last Winter... without the terrible ending. Szostakiwskyj's movie was heavily insular and didn't feel like it was in a rush to visualize its demons. I admire that. Some viewers may think that amounts to a lack of payoff, but I've seen other films go for it and fail – the aforementioned Winter and 2010's The Corridor being two examples – when discretion would have likely been the better option. I far prefer the way Black Mountain Side handled things in this particular case. I also like that gore was used sparingly to emphasize its effect.

I think my only real qualm was that some of the characters were a bit difficult to differentiate at times. Apart from Radio Guy (Shane Twerdun) and University Professor (Michael Dickson), most seemed to blend together. It really shows the brilliance of John Carpenter's masterpiece that he was able to make everyone distinct, in pretty much the same amount of screen time. What happens in Black Mountain Side was more like The Thing remake, where it seemed the cast were competing to see who could grow the best beard.


Apart from that though, this was a solid thriller that effortlessly mixed science with the supernatural to reinforce the tried and true adage of “don't fuck with old stuff.”
Posted by Jay Clarke at 10:00 AM