Seven years ago today, I began this humble blog. So much has happened since 2007 that I decided to make a list – aptly seven items long – detailing the highlights about curating The Horror Section.

1) When I started THS, it was intended to be a VHS cover art archive. I spoke about this in my first few posts, but I was really frustrated with the state of film marketing and poster art at the time. The ten years previous to 2007, there had been some real half-assing going on and it was getting a little frustrating. I wanted to make sure that the great art of the seventies and eighties didn't wink out of existence. Fortunately, shortly after that time, the art of yore made a comeback. Fuelled by the wave of retro-style filmmakers like Ti West and Jason Eisener, among others, old was new again. This also brought renewed interest to a format that was many thought was down for the count. And I couldn't be happier.


2) One thing that THS has given me is a regular routine of writing. Sometimes you don't always feel like sitting in front of your computer screen, but after I got this going, I started to feel antsy if I hadn't posted for a few days. Sometimes it was a struggle to find things to write about – as I certainly haven't written about every horror flick I've seen – but weekly bits like Trailer Tuesdays, Coverbox Wednesdays and Sunday's Don't Kill the Messenger have certainly helped. Over the last seven years, I've kept up a loose regimen of at least three posts a week, and two hundred posts a year. And I haven't missed the latter yet.

3) As you have no doubt gathered, I own a ton of horror shit. Before the blog, it was an unorganized mass languishing in the dark pit underneath my parent's house. However, once I had the idea to archive my collection, it gave me the push I needed to get it all sorted. It took hours and hours of work – especially the posters, hoo boy – but my segment It Came From The Archives is now twenty-three episodes in. My goal for the New Year is now start cataloging on the non-horror ephemera, perhaps putting my long dormant Instagram to good use. 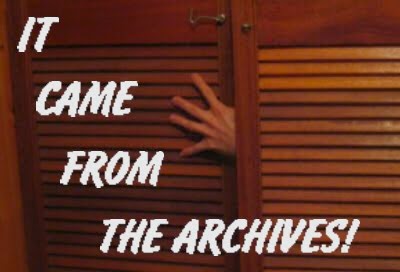 4) I've corresponded with so many wonderful people through the site. Whether they be fellow bloggers (like Stacie from Final Girl, Heather from Mermaid Heather and Cory from Inevitable Zombie Apocalypse) or fans just checking in with kind words, it makes everything sweeter. I've been happy to write guest posts for several different blogs as a result of stuff I've done here, and I've even had the occasional guest writer at THS as well – the most recent being Paul Corupe of Canuxploitation.com. I've had the pleasure of spreading the word about many indie projects over the years – some of which have even seen the light of day. It's a good feeling putting positivity out into the universe. It seems in short supply these days, so every little bit helps.

5) An extension of number four was gradually getting accredited for film festivals. I'd be covering them anyway, but saving some dough is always nice. I adore Fantasia, Toronto After Dark and most recently Blood In The Snow for the wonderful camaraderie they breed among horror scribes. There's nothing I like better than sitting in a pub, a pint of Moosehead at hand, and talking about film. I'm blessed to still be able to do this several times a month.

6) The thing I'm most proud of though are my short film accomplishments over the last few years. There is no way I would have had the courage or knowledge to attempt it if I hadn't honed my barely adequate skills here. With the immeasurable help of countless individuals I've had three short films (among other things) play on big screens across North America over the last three years. And I haven't yet been run out of town on a rail, which is an achievement in itself.


In addition to my own endeavours, I've also had the pleasure of working on projects from my filmmaker friends Chris Nash, Michael Schwartz, Mike Pereira and Darryl Shaw. If you don't know their names yet, I can assure you. You soon will.

7) The last thing is just having your thoughts all in one place. Memories fade, but if I ever forget the details of a particular horror film, I can look it up in an instant. I basically have my own personal History of Horror 2007-???? going here. I can map out trends. I can track projects from conception to release. I can plot a time line of a new genre director's career. Oh, and I love going into the analytics and seeing how people found the site. A few of my recent keyword favourites were “fucktown” and “santa smoking a joint”.

So, seven years down. Thanks to everyone who keeps looking in. I hope I can continue to provide interesting content. I have a few off-site projects on the go, but rest assured I'll always keep coming back to THS. Have a great rest of the week, kiddies!
Posted by Jay Clarke at 10:00 AM