Hey gang, hope you're having a good weekend and were able to get out and catch It Follows. If not, well... Anyhoo, here's what's been going on otherwise.


Huge news this week, as it was announced that FOX is bringing back my favourite show of all time, The X-Files for a six-episode run. Not only that, but both David Duchovny and Gillian Anderson will be returning as the inimitable Mulder & Scully.

I'm excited about this, which is weird as just a few years ago, when the second film came out, I felt like the show had run its course. Duchovny had re-branded himself with a new show, Californication and Anderson was on hiatus (in that she was nowhere near as visible as she has become in the last few years with roles on Hannibal and The Fall), so along with the second film not being as strong as it should have been, I was of the mind that they should just close up shop and move on.

Now I'm not so sure. With the return of Twin Peaks on the horizon, this somehow feels right. And with a run of six episodes, they've got time to a nice, well conceived arc. So, I'm back in. No announcement has been made about timeline, but one can expect Mulder & Scully to be back sometime in 2016.

The Man In Black.

Slender: The Arrival released this week on various platforms.


It looks super creepy, but I wonder if the experience is better served by watching people play it via YouTube, rather than actually playing it yourself (like its predecessor Slender: The Eight Pages). I still have to smile when I think how a SA Photoshop meme became a modern urban legend phenomenon. It just further goes to show that the World Wide Web has become the new campfire.

The Void is Growing. 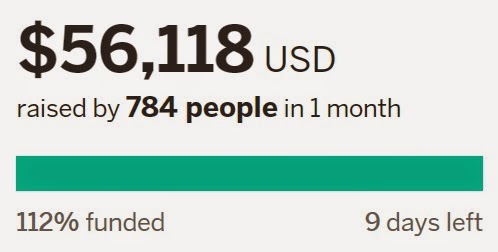 It's rather incredible that it took in the back half of that amount in the last week after landing on a couple of well-trafficked sites like Cracked.com. I couldn't be happier for these guys, for not only that they now have the funds to truly make the film they want to make, but also that the horror community got behind them so definitively.

Part of that is obviously due to the project being awesome, but they also have some really great perks available, including posters from the best artists working in the biz, Astron 6 soundtracks and even interesting ways to become involved in the production.


Having now met their goal with still over a week to go, the production team have now introduced some stretch goals, which you can check out here.
Posted by Jay Clarke at 12:47 PM