It took over two years, but I was able to orchestrate another VHS Nite at my abode last weekend. This time around, I planned a VHS double-bill featuring killer robots, the first being Jim Wynorski's 1986 flick Chopping Mall. 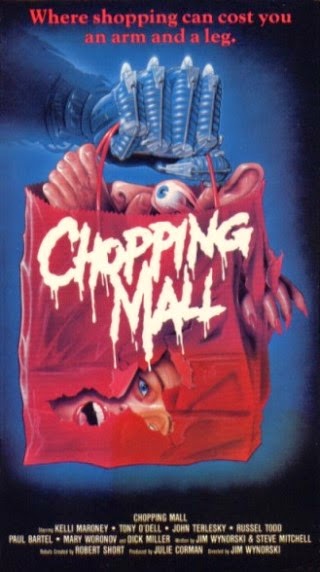 It had been many, many years since I'd watched this movie and had been meaning to revisit it ever since I snagged a VHS copy from The Vault a while back. I remember digging this film when I first saw it, mainly because of the nudity, solid head explosion scene and cool looking robots. Watching it again, I was happy to discover that it was even better than I remembered.


This movie has so much going for it and is fully entrenched in that happy-go-lucky exploitation feel that a lot of low-budget, but well-produced, horror movies from the eighties had. Being older I was able to fully appreciate all the references and cameos (like Dick Miller, Gerrit Graham as well as Mary Woronov & Paul Bartel reprising their roles from 1982's Eating Raoul) that Wynorski put in there.

I was now even more awestruck by the practical robot effects. With the exception of the laser beams (with added War of the Worlds foley), all of the Protectors actions were done in camera by way of remote control. It may not seem like much now, but in 1986 that must have been a pretty ambitious undertaking for a project that cost under a million to make. And the robots also shit-talk, which only adds to the levity.

But, let's not take away from our colourful cast of characters, including the lovely Barbara Crampton as Suzie, Tony O'Dell as the quintessential nerd Ferdy and John Terlesky as the perpetually gum-chewing Mike.


This movie is super fun, and at a brisk seventy-five minutes, runs at a great pace for almost the entire movie.

Moving on from this, I fired up 1995's Evolver, a thrifty acquisition from Amazon.com. I came across this movie when I heard about the robot design being somewhat similar to that of the Protectors in Chopping Mall. And you know what? It is. 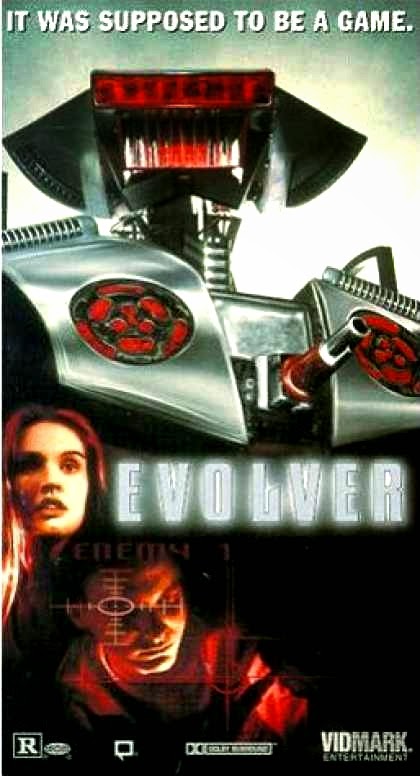 The premise here is that Ethan Embry (inexplicably credited here as Ethan Randall) wins a robot in a video game contest, which then goes ape-shit after a few rounds of Laser Tag. And all this while the robot's creator played by John “Q” DeLancie glowers in disbelief that his creation has somehow reverted back to its original military programming. And like the Protectors in Chopping Mall, Evolver also has a mouth on him, which funnily enough is voiced by William H. Macy. I know, right?

What is kind of hilarious is how tiny the thing is when it first rolls out of its crate. From the cover, I was expecting it to be a giant, but it barely comes up to the actors' waists. Still, once it switches out its Nerf ammunition for ball-bearings, knives and then lasers, things get a little more interesting. 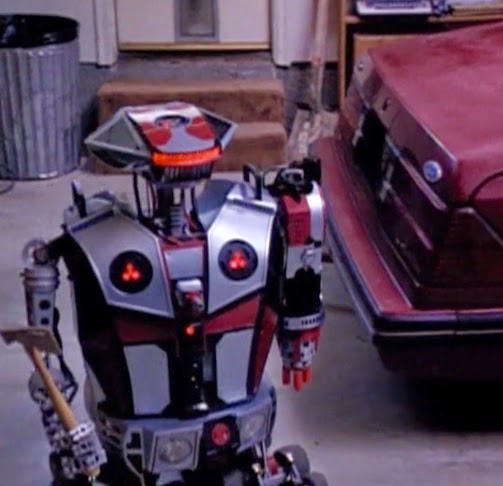 Also, there are some pretty crazy virtual reality scenes that take place in an arcade. I love watching nineties films because of their nonsensical grasp of hacker and video game culture. I mean look, here we are twenty years later, and we STILL don't have a consumer product VR headset. Sure, developers are messing about with the Oculus Rift, but I'm still not able to walk into a Best Buy and grab one, am I?

In addition to the characters being somewhat irritating or douchey, (Embry's character has one of the worst cases of Dawson Leery Syndrome I've seen in quite some time – in that the female lead Cassidy Rae is basically throwing herself at him and he's too much of a nerd to realize it) so is the robot. Evolver is not only homicidal, he's also kind of a dick about it.

However, as with Chopping Mall, I was also impressed with the design by FX guru Steve Johnson. There was a lot of articulation in the head, neck and arms, which gave him a lot of range. I kept expecting him to get larger at some point, but nope. Even when he morphs into military grade “Level 4” badass, he is still pretty toy-sized. 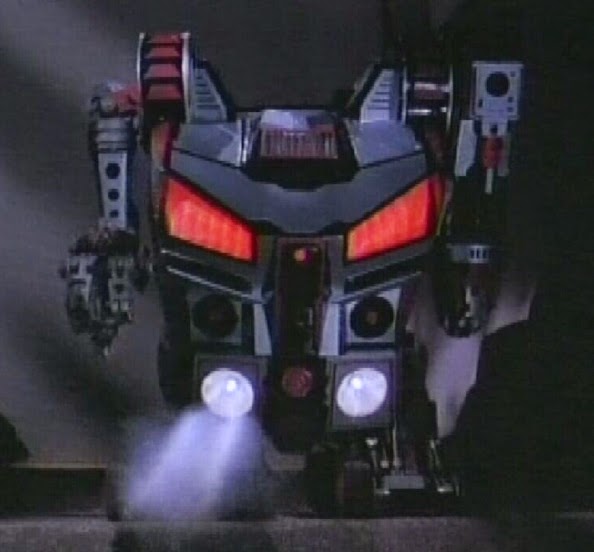 So, Evolver wasn't quite as good as Chopping Mall, but still serves as an entertaining banner of its decade.


It was another successful movie night in the Western frontier. Now, I have to start scouring for two more suitable titles to play together. Although, if frequency holds, I've got plenty of time.
Posted by Jay Clarke at 10:00 AM