Who You Gonna Call?

The Black Museum kicked off its fifth semester of lectures last week with a comprehensive look at the steely character known as the paranormal investigator. 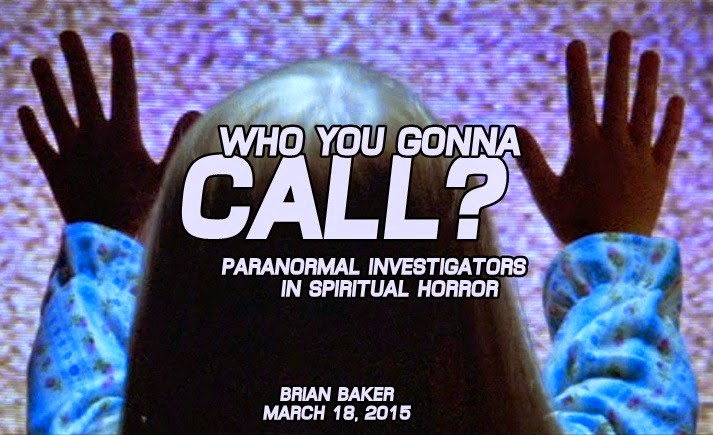 Toronto journalist Brian Baker was on hand to guide us through the creaky mansions, abandoned asylums and hallowed grounds that have made the paranormal investigator the most earthly trope of supernatural horror.


Baker began with saying that ghosts have always been a part of our history. Even though the ghost story dates all the way back to 33 B.C, he chose to focus his talk on the transition from Victorian Gothic hauntings into modern horror.


But what are hauntings exactly? Well, Baker explained they could be broken down into three categories.

Ghost – is an apparition, the spirit of a dead person appearing to the living.
Poltergeist – is a supernatural being that can physically move objects.
Demon – is a spirit that is otherworldly, and not human.

This can also be seen as an evolution; a shift due to audiences needing to be more scared by their eerie entertainment. So, ghosts became poltergeists, and poltergeists became demons.

From here, the lecture was broken into two halves, the first being the real-life ghost hunters and then those of fiction. Though not officially recognized by the scientific community, paranormal investigation has ballooned in recent years with chapters popping up in every major city. There are programs functioning in several universities, but they often funded by like-minded philanthropists and not the school system. A dip in the interest in the eighties saw many of these programs shut down – as evidenced at the beginning of the film The Ghostbusters.

But we've come a long way since then, as now we are over-saturated with media about paranormal investigations, including the likes of Ghost Hunters and Ghost Adventures. However, the two most widely known investigators were the husband and wife team of Ed & Lorraine Warren.


The Warrens claimed to have investigated over ten-thousand cases over their long careers, the most famous being turned into the popular movies The Amityville Horror, A Haunting In Connecticut & The Conjuring.

“These forces are eternal, and they exist today. The fairy tale is true. The devil exists. God exists. And for us, as people, our very destiny hinges upon which one we elect to follow.” - Ed Warren.

Moving onto fiction, Baker pointed out the two most influential pieces of literature on modern supernatural horror were Shirley Jackson's The Haunting of Hill House (1959) and Richard Matheson's Hell House (1971), later adapted into the films The Haunting (1963) and The Legend of Hell House (1973) respectively. These works brought about two of the main themes of the subgenre, faith vs. science and characters denying the existence of the supernatural despite the evidence in front of them.

The Amityville Horror (1979) based on Jay Anson's account from two years previous featured the most famous icon of supernatural horror, 112 Ocean Ave and its foreboding quarter-window eyes. Focusing more on the second film of the film franchise, Baker brought up perhaps the most popular trope of the haunting/possession films, isolation. Very often you see the evil spirit isolate its target from the rest by breaking down the family unit. This then brings about the last common theme of Good vs. Evil.

Moving into the eighties saw one of the most popular films of the genre, Poltergeist. Its notoriety went beyond the film when people began speaking of a Poltergeist “curse” after several tragedies befell several members of the cast. It is rumoured that the crew used real skeletons in the swimming pool scenes and that brought about a curse that then inadvertently caused the deaths of Dominique Dunne, Julian Beck, Will Sampson and Heather O'Roarke. Complete nonsense to be sure, similar stories surround other such films of the time, like The Omen, but it makes a great story.

Moving into present day, Baker brought up films such as The Frighteners, which saw the ghost hunter using his gifts for personal gain, and Grave Encounters that played up the hammy reality television host angle. He also spent some time on the solid 2012 film The Awakening, which brought the Victorian ghost tale full circle. He also didn't leave out Paranormal Activity, which is a perfect example of what can happen when you wait too long to reach out for the professionals. Nope, your idiot boyfriend is no substitute for Zelda Rubenstein.


As with television, films about paranormal investigation are everywhere with five titles being released just this year (Insidious 3, The Conjuring 2, the Poltergeist remake, Amitville: The Awakening & Paranormal Activity 6) and no sign of things slowing down.

Baker's talk was a solid and informative walk down the annals of paranormal investigation. And who knows, maybe, someday, one of these guys will actually nab some irrefutable proof of the other side.
Posted by Jay Clarke at 6:00 PM