I've got a Superbowl party to get to, so no time for love Doctor Jones!

Jason Bene is still making with the awesome posts over at Killerfilm. His Late Night Classics segments just keep me coming back for more. Last week, he posted an interview with Jim Isaac, director of an underseen gem from the eighties called The Horror Show starring Lance Henriksen and Brion James. The interview is great stuff, covering Isaac's background as an effects man, coming in as a replacement on The Horror Show shoot and why it is also known as House III in some markets. Here below is a snippet concerning the oft-talked about comparions between The Horror Show and Wes Craven's Shocker.
Jason Bene: Wes Craven and (Horror Show producer) Sean Cunningham are great friends, and both Shocker and The Horror Show deal with serial killers being sent to the electric chair. Do you know which film went into production first and was there any kind of strife between the two?

Jim Isaac: The Horror Show was first. Shocker I believe was released first because Wes had more clout. We tested off the charts. There was some regime change at United Artists right after our test screening. They looked at what they had on their slate and they didn’t want to be known for horror films. They pulled back the release and Sean was fighting saying “Look at these cards, you have a hit on your hand.” Wes asked Sean if he could see a rough cut of The Horror Show and I said to Sean I know you guys are buddies and all but do we really want to do this? I’d rather not show that to anybody yet, especially since he’s doing a movie about the same thing. I was a little bit concerned about it, but Sean didn’t seem to care. I’m not sure what Wes did or didn’t get out of it. I do know The Horror Show was first.

For the rest of the interview, click here. And if you, for some reason have no idea what I'm raving on about, check out The Horror Show trailer below.

Drew Daywalt released his newest nightmare online last week. Suicide Girl is a little short about death and consequences that is definitely worth four minutes of your time. I suggest you watch it with the lights out and your headphones on.

Man, this guy is talented, with such a wicked sense of space & sound. I can't wait for his upcoming series Camera Obscura.

Here's a cool piece I discovered on Digg this week. Dainis from Hongkiat.com maps out the evolution of horror movie posters over nine decades, from Nosferatu to My Bloody Valentine 3D. Click here to check it out.

It's funny. I was just talking last week about that long lost original director's cut of Nightbreed and now it looks like it may actually see the light of day. On Thursday, HorrorHound magazine announced that it will be screening it as part of their March 27-29th HorrorHound Weekend festivities. This is groundshakingly awesome! I feel like climbing the nearest building and yelling "ROAD TRIP!!!" Click here for more details on the event. Also, thanks be to Schwartz for giving me the heads up on this. 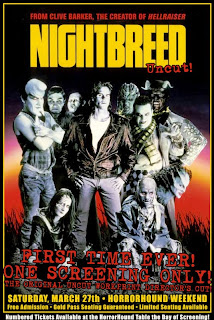 I'm pretty damned excited about this. I'm a huge fan of Nightbreed even in its current state.