Last night, while downtown on one of my VHS hunts, I popped into The Bloor to check out a screening of the 1972 zombie biker flick Psychomania. 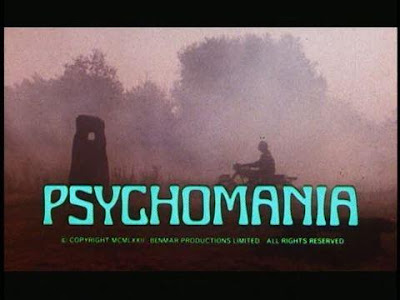 After biker gang leader Tom Latham (Nicky Henson) dies and comes back to life, he goes about trying to convince the rest of his crew to join him on the other side. All of them seem willing, except his girlfriend Abby (Mary Larkin) who may take a little more persuading.

I had a fairly good time with this, despite the terribly wavy and washed out quality of the projection. Most of the movie was pretty dated and stiff, but there was some fun to be had here. The ideas present in the film are sound, it is just the execution that is flawed. It doesn’t go as far as it should have and left me feeling there was a lot withheld. Considering, this would have been around the time A Clockwork Orange’s maniacal youths assaulted audiences, it makes Psychomania seem downright sanitary. Now, you know where I stand on remakes, but in this case I can’t help but think this one might benefit from a retelling. Like I said, the framework is solid, so in the hands of a talented cast and crew, this could really pop. I mean… Zombie bikers! If that’s not an untapped resource, I don’t know what is. I guess there’s Ghost Rider, but we needn’t speak of that. The most interesting stuff for me was all the motorcycle footage though, often taken at break-neck speeds while oncoming cars whizzed by. The seventies really did have the best car chases, didn’t they? The music by John Cameron is also wicked as well and will no doubt delight audiophiles into quirky film scores from that time period. 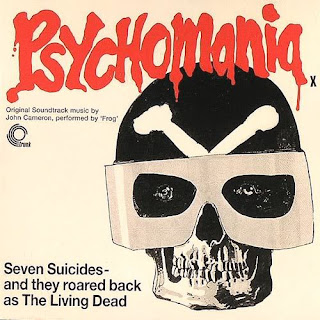 Psychomania was quite the up-and-down experience for me. It is for the most part pedestrian cheese, elevated once in a while by stunt driving and the occasional standout bit – like when Tom bursts out from his grave – but it was enough of a curious oddity to make me want to post, albeit briefly, about it.
Posted by Jay Clarke at 6:45 PM