This Is Why I Don't Ski.

The Horror Section has been around long enough now that I've seen films from inception through to release. Frozen is one such film. I remember when it first got announced. Director Adam Green wanted to squeeze in a little indie before starting work on his sequel to Hatchet. It was to be a simple story about three people that get trapped on a ski mountain chair lift. Well, this weekend this little indie that could got a limited release through Anchor Bay. Furthermore, by some miracle, it actually got a release in Canada! I'd been dodging trailers and early reviews for this because I wanted it to be as fresh as possible. These small character pieces can often be really solid – previous examples being 2003's Open Water and 2007's Black Water – and benefit from knowing as little about them as possible. 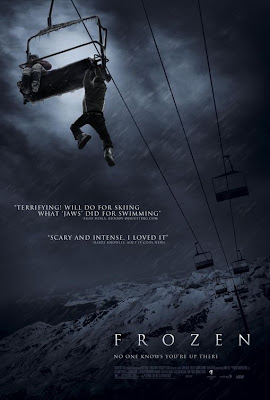 I'm happy to say that Frozen is excellent stuff. I think what really sets the film apart is its dialogue. A lot of films of this type tend to rush through the setup and exposition to get to the scenario that got people in the seats in the first place. However, Frozen doesn't do that. It takes its time and it pays off. It feels natural and the three people onscreen (Shawn Ashmore, Kevin Zegers & newcomer Emma Bell) seem like real people, all with their own history, families and for lack of a better word... character. I felt like they could easily exist in this world and not just on a movie screen. That's tough to do, but Green makes it seem easy. Seriously, I have mad respect for the guy. Hatchet was a fun and gory slasher, but Frozen really lets him flex his muscles as a filmmaker. I don't want to heap all the praise on Green though, as the three leads did a fantastic job on what must have been a difficult shoot.

Another thing I appreciated was that the gore in this film was fairly reserved. After a film like Hatchet, it would have been easy for Green to throw buckets of blood at us, but he's smart enough to know that wouldn't suit the story and meters it out accordingly. Frozen also doesn't overstep its bounds. It always remains in the realm of believability, which is tricky when trying to maintain a certain level. In amongst all the tense moments (of which there are quite a few), there is also some humour to be had for genre fans. Adam Green works within a tightly knit group of American filmmakers, all of which are slyly mentioned within the film, the most overt being that Ashmore's character is named Joe Lynch. It's quirky stuff like this that can give you a chuckle and relieve tension without having to be an on-the-nose attempt at such. Green, and his peers bring a raw enthusiasm to the table that is unfortunately in short supply on this side of the pond lately.

If you are a horror fan, you should be supporting this movie. Green has stepped up to the plate and given us something to be proud of, so do your part. If not, I better not see you down the road, bitching on Internet forums that the only horror films that come out have titles followed by a number.
Posted by Jay Clarke at 6:31 PM