The Autumn Moon Is Bright.

Today I took in The Wolfman, or as a friend of mine adorably pronounces it - The Wolfmun. I have to admit I was skeptical going into this movie. Nothing up until this point had really made me at all excited about it. I had been led to believe that it was just another CG wankfest ala Van Helsing and without Kate Beckinsale to keep me interested, I failed to see what would. However, considering how important the character of the Wolfman is to horror canon, I couldn't in good conscience avoid it. 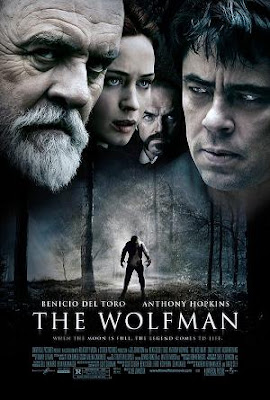 Lawrence Talbot (Benicio del Toro) returns to his childhood estate after his brother's murder. He soon finds the one responsible is a werewolf and is bitten himself. Now, all around him, including his brother's fiancé Gwen (Emily Blunt) and his estranged father (Anthony Hopkins), are in mortal danger.

I have to say that this movie was WAY better than I thought it would be. There are several reasons why I think it quickly allayed my fears, but first and foremost was employing the correct tone. The Wolfman is the furthest thing from the camp of Van Helsing as you can get, instead being more like 1992's Dracula, but without Keanu's terrible English accent. Populating your movie with top tier talent is another way to win your audience over. Even though a limited amount of time is spent building a rapport between del Toro and Hopkins, it IS there. Emily Blunt didn't really do anything for me, but she certainly didn't look out of place in the presence of such thespians. 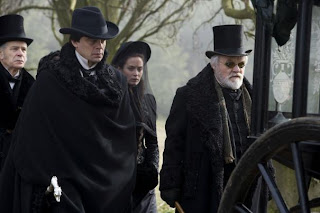 Additionally, the story was quite serviceable, with several similarities and nods to the original 1941 version. I also thought Hugo Weaving's character, that of Inspector Aberline, head investigator of the Jack The Ripper murders – which took place three years before this movie's events – was a nice little detail. And the fact that there were several set pieces spread throughout the film really helped the pace considerably. Now, moving onto the effects, the CG wasn't nearly as intrusive as it could have been. Yes, the transformations were done digitally, but for the most part they were fairly seamless. Fortunately, the production had the mad skills of Rick Baker at their disposal, so not only did he push for practical effects, but the original Lon Chaney design remained intact for the most part. Baker has spent his entire career waiting to work on a Wolfman movie and his enthusiasm shows, as he doesn't hold back. This movie was much gorier than I was expecting, which was a welcome surprise. I found myself noticing a few similarities between this and Baker's seminal work American Werewolf In London actually, but I doubt it was intentional.

I wouldn't go so far as to say this movie was anything spectacular, but it is certainly worth a watch. It tells a tried and true tale and looks and sounds good doing it. When it comes right down to it, that's all I could really ask for.
Posted by Jay Clarke at 5:40 PM

Wasn't a big fan of this movie either and did find it a tad boring, but there were still some aspects of the film I really did enjoy. The hallucinations scenes are the first thing that pops up to mind which I felt they were all perfectly done. Unfortunately, besides that there wasn't too much I could overall back up to fully recommend to people. I did appreciate the scene of Gwen running through the forest near the end as a nod of the original.

I wrote more for my review here...

there was a whole scene as an homage to american werewolf,the one in picadilly with the bus and stuff...i can believe no ones noticed of that....

Good catch, I did notice that actually. What made me think of it was Talbot's early hallucinations much like David has in the hospital in AWIL. The Picadilly stuff was definitely the icing on the cake though.