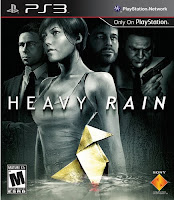 Last Thursday, the demo for Heavy Rain, Quantic Dream's upcoming interactive film noir was released on the PSN. I ran through it a few times and here are some thoughts. The first thing that struck me was the aesthetic. This game really does look and feel like you are walking around in a David Fincher film. It is dark, dank and shadows lurk everywhere. Just the tutorial, where all you are doing is leaving your car and walking down an alleyway, is bursting with detail. The next thing - and obviously the most difficult to get used to - were the controls. My gaming diet consists mainly of first-person-shooters, so not using the analog stick to move was immediately disorienting. Instead, the controls are an evolution of the ones Quantic Dream employed in their previous game Indigo Prophecy, where the analog sticks are used for interaction and one of the shoulder buttons (R2) is used to move. As you can see from the graphic below, there is a bit of a learning curve.

I got used to them fairly quickly though and by the end of the demo, I was already anticipating what I would have to do, like 'I'm walking towards police tape, I bet I'll have to push down with the analog stick...'

As was spied in various videos released over the past few years, there are a good deal of Quick Time Events in the game. However, they never seemed out of place or frustratingly difficult. Unlike a game, like Resident Evil 4, where one missed button meant a grisly death, failure to hit a button simply causes a reaction in a sequence of events. In the demo, you get into a fist fight in a hotel room. It was a sequence of a dozen or more QTE's and my actions determined how the fight played out. My interaction had a flow that made the fight play out like it would in a Hollywood movie. I was really into it. Also interesting, are the investigation techniques. The Scott Shelby character is a private eye and has to use interrogation to get information, but another character you play in the demo is a fed and also has technology at his disposal. Using a pair of glasses and a special glove, Norman Jayden can get instant forensic analysis from anything at a crime scene. Walking around the site in the demo was really cool as you collected clues to reconstruct the incident. Here's the tech in action, from last year's E3.

I think my only concern with the demo was some of the voice acting. After being spoiled by games like Uncharted, this seems like a step back and considering how important dialogue is to this game, it could be a problem. It was only mildly distracting though, so if the story is compelling I'm sure I'll be able to overlook it.
This demo delivered on what I hoped Heavy Rain was going to be and now I can't wait to explore this dark new world.
Posted by Jay Clarke at 11:02 AM

I'm not a huge gamer as I used to be but I will play the hell outta a fighting game. This game does seem fun, though.

My friend actually made a pretty darn good trailer of the game you could find here...