Several months ago while chatting online with Cory over at the Inevitable Zombie Apocalypse, he broached the subject of doing a post swap between our respective sites. I would write something zombie related, and he'd come up with something in the vein of vintage home video. After taking some time to get our ducks in a row, and a date nailed down, here it is...

I didn't have the benefit of a friendly neighborhood mom-n-pop video store as a kid. I mean, maybe they were around, but at my house renting movies was more the exception than the rule. My early education and indoctrination in the film genres of science fiction, horror and exploitation came from that other great infiltrator of living rooms of the '80s -- cable. My parents were early and enthusiastic adopters of cable and, although we owned a VCR, it was used far more often to record movies than to play back rentals. Why rent when we already had a couple of pay movie channels, plus another dozen or so channels of programming coming in? 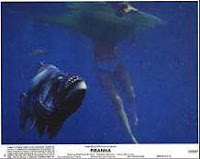 Because of that I didn't become aware of movies based on a cool box art or poster in the store. My tastes were set by whatever my dad was watching and whatever was on late at night, after my parents had gone to bed. But it wasn't much of a handicap. My parents had a laissez faire attitude toward what I watched, so I remember watching Phantasm, and being completely freaked out by it, when I was around 9 years old. Scanners, Piranha, Humanoids from the Deep, A Nightmare on Elm Street, Night of the Comet -- I have vivid, indelible memories of all of those and many more. They came directly into my home, unbidden and uninvited but so, so welcome. And I knew nothing about them -- lacking even the hints one might find on a box cover -- until I sat down to watch them, sometimes halfway through (always a weird way to watch a movie, but hey, whatever's clever). 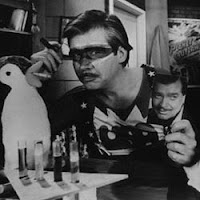 And over on the non-premium channels, there was a veritable torrent of great, weird old stuff. Elvira, Commander USA's Groovie Movies, later USA Up All Night, and similar shows. Most of them played to my night-owl tendencies, the rest filled Saturday afternoons, bringing a slew of older, weirder and ridiculous trashy and bad movies into my life. It was a beautiful thing. And yes, many of them were edited, sometimes to a ridiculous degree. That just gave me ample motivation to go back later and hunt down unexpurgated versions of the films I half-remembered, to see what was really going on -- a process which has helped illuminate many interesting corners of film history.

In all honesty, cable was perhaps the perfect thing for me. I've always been a bit picky about what I will go out of my way to watch. If I give myself a chance to overthink it, I can talk myself out of taking the trouble to watch anything. So even if I had the unlimited access to a killer VHS store like many of my peers seemed to, I still likely wouldn't have had the same kind of broad-based, wide-ranging education in the fine art of trash that I got from cable TV. And sure, I never had the benefit of being able to rent a favorite title over and over again, but a lot of those movies were shown dozens of times over the course of a few months, and I'd see them seemingly every time my folks went to bed, so I had ample opportunity to study the nuances (plus, I taped a few of my favorites).

Thanks again to Cory for proposing we do this. His post totally brought in a new dimension I hadn't even considered. To view my article over at The Inevitable Zombie Apocalypse - where I assemble the ultimate zombie-killing dream team - click here.
Posted by Jay Clarke at 10:00 AM

Congrats on your decision to tag team the zombie/horror genre with Corey. I read his stuff every day and your site looks pretty in-depth with lots of well thought out reviews...ill definitly be back!

Thanks for the kind words, looking forward to your feedback in the future!